Smoke was seen billowing from Maison de la Radio in Paris, the home to Radio France, after a fire broke out on the seventh floor forcing the buiding's evacuation. One employee said "no fire alarm was sounded." 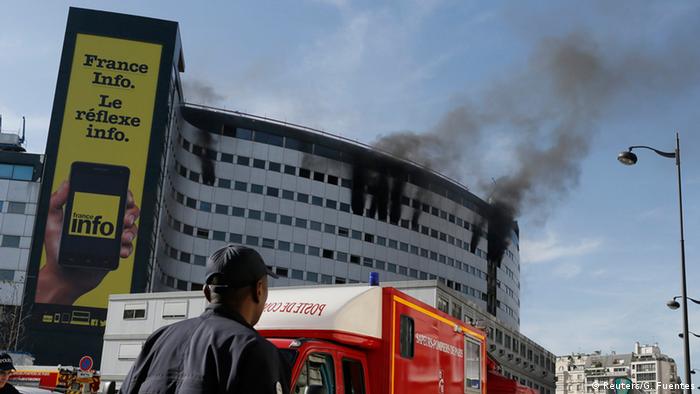 A huge fire broke out on Friday in the iconic home of France's public service radio broadcaster, Radio France. All occupants were evacuated.

According to firefighters at the scene the blaze at the "Maison de la Radio" broke out on the seventh floor at approximately 12.30 p.m. local time (11:30 UTC). Images were posted on the social networking site Twitter, which showed thick black plumes of smoke billowing from the circular building on Paris' River Seine.

There were no immediate reports of injuries, but two radio stations, France Info and France Inter, stopped broadcasting due to the blaze.

One journalist at France Inter, Jean Philippe Deniau told BFM-TV that "no fire alarm was sounded" and that the employees evacuated themselves from the building.

Fire services chief Gabriel Plus told the AFP news agency that 16 fire engines had been dispatched and that they were setting up a command post on site.

The building which was inaugurated in December 1963 by then-French President Charles de Gaulle had been undergoing renovations which were due to be completed by the middle of next month.