Social media users and US media have slammed an editorial cartoon of Serena Williams, comparing it to "Jim Crow caricatures." The cartoonist and a Melbourne newspaper have doubled down in their defense of the drawing. 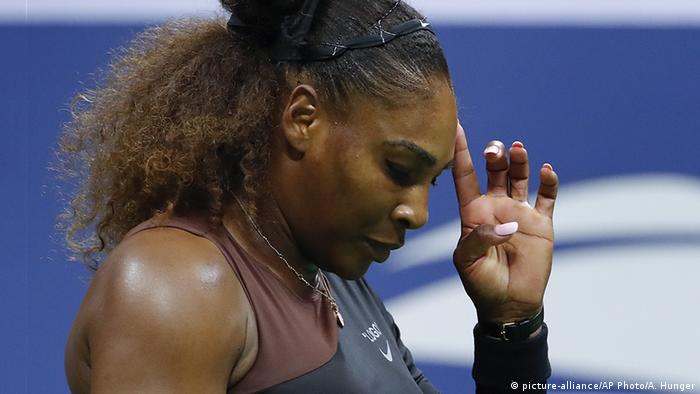 Australian cartoonist Mark Knight defended his depiction of tennis star Serena Williams at the US Open finals on Tuesday after receiving a wave of criticism calling his drawing racist and sexist.

The cartoon depicts a fat-lipped, large-nosed Williams jumping on her tennis racket, with a baby pacifier nearby — perhaps referencing her status as a new mother or the artist's interpretation of her behavior on the court.

In the background, the umpire leans over to a woman ostensibly depicting tournament-winner Naomi Osaka — who is of Haitian-Japanese descent, although the cartoonist gave her long, blonde hair — asking: "Can you just let her win?" 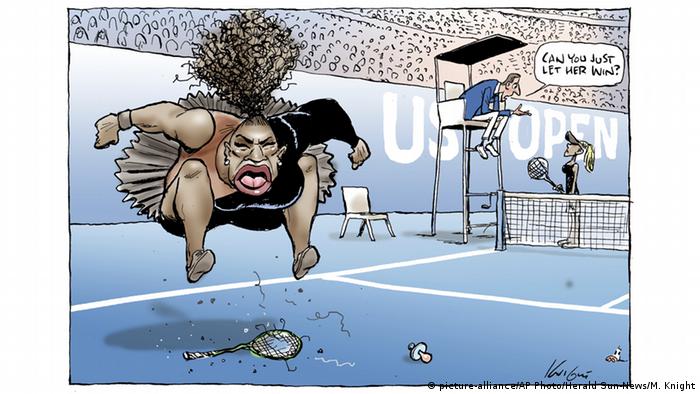 Knight hit back at critics, saying the cartoon was only about the "tantrum" Williams had during the US Open final.

"That's what the cartoon was about, her poor behavior on the court," he told Australian broadcaster ABC. "Nothing to do with gender or racism at all."

Melbourne's Herald Sun newspaper, which published the cartoon on Monday, said that they supported both Knight and the drawing.

The newspaper reprinted the image on the front page of its Wednesday edition.

British author J.K. Rowling wrote on Twitter that the cartoon used "racist and sexist tropes" and turned Osaka into a "faceless prop."

Numerous US media outlets and social media users also noted Knight's incorrect depiction of Osaka as a petite woman with straight blonde hair. The Haitian-Japanese tennis star is actually taller than Williams and has curly, dark hair with blonde highlights.

The Washington Post ran a column about the cartoon, saying it resembled caricatures circulated widely during decades of racial segregation in the US.

The event that sparked the cartoon occurred during the US Open final on Saturday. Williams was given three code violations for receiving coaching, breaking her tennis racket and for calling the umpire a "thief."

Williams criticized her treatment at the US Open as sexist, saying that men in tennis can get away with arguing or misbehaving on the court, whereas women are penalized. The World Tennis Association backed Williams on Monday, saying that men and women should be treated equally in the sport.