American smartphone chipmaker Qualcomm has been fined by the European Union for paying Apple to use its chips exclusively. The punishment represents nearly 5 percent of the company's 2017 turnover. 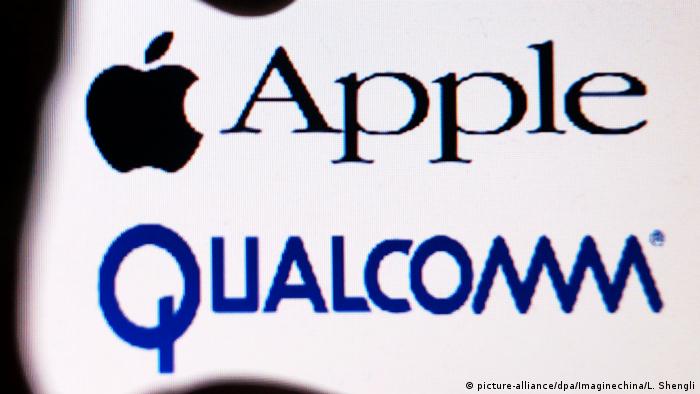 US smartphone chip supplier Qualcomm has been fined €997 million ($1.23 billion) for breaching European Union competition rules through a deal with Apple, the EU Commission announced Wednesday after concluding a two-and-a-half year probe.

Qualcomm abused its dominant market position by paying billions of dollars to Apple since 2011 in exchange for the tech giant exclusively using Qualcomm chipsets in its smartphones and tablets, the Commission said.

The fine is the latest blow struck by the EU against an American tech company and also a fresh hit for Qualcomm following an antitrust fine of $800 million imposed by Taiwanese authorities last year.

Qualcomm is the world's largest supplier of baseband chipsets, which are used to send and receive voice and data transmissions on smartphones, tablet computers and other mobile devices.

Interview: trade cartels and the law

The latest fine represents 4.9 percent of Qualcomm's turnover last year. Margrethe Vestager, European commissioner for competition, noted that Apple was not implicated in the case because the issue was "clearly" Qualcomm using its dominant position to undercut competitors.

Vestager added that the deal prevented Apple from possibly switching to other suppliers of baseband chipsets, denying choice to consumers. "Qualcomm's behavior denied consumers and other companies more choice and innovation — and this in a sector with a huge demand and potential for innovative technologies."

Separately, the chipmaker and Apple are currently entangled in a bitter legal dispute over patents and royalties. The iPhone maker filed a lawsuit in San Diego federal court in January 2017 accusing Qualcomm of abusing its power for certain mobile chipsets to demand unfair royalties. The EU's decision might bolster Apple's position in this and other lawsuits.

The European Commission said that Apple apparently "abused its dominant position" in developing its Apple Pay system. The US company could face billions in fines.

A leading EU court has rejected an appeal by Google over a fine for demoting rival shopping services. The penalty was the first of three antitrust penalties.