The World Cup 2022 host has been under pressure to ensure migrant workers are paid on time. But trumpeted reforms due to go into force this week have been pushed back until November 2. 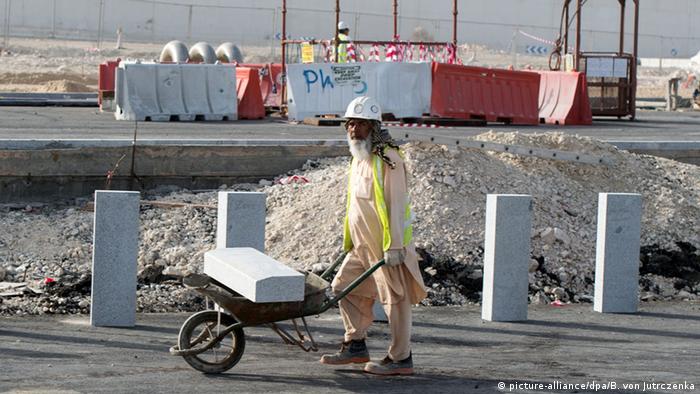 Qatar is delaying laws requiring firms to pay fully and on time for another two and a half months, a leading Doha-based newspaper reported Tuesday.

The so-called Wage Protection System signed six months ago was meant to go into force Tuesday.

Rights groups complained that the added delay calls into question the government's commitment to labor rights.

"Overall, the proposed changes are welcome, but they are of limited scope, have yet to materialize and it's questionable whether they will come actually into force," Mustafa Qadri, Gulf migrant rights researcher at the human rights group Amnesty International told the Reuters news agency. "There's a fear the introduction of the wage protection system is being used to deflect attention away from the fact that no other reforms have been implemented."

Enforcement pushed back until November

Private sector firms have been told they will have more time to prepare despite the emir's signature of the labor law.

Published reports say the new law would impact 50,000 companies and that the government felt some firms weren't ready to comply with legal requirements to pay salaried workers by electronic bank transfer at regular intervals.

"An electronic record of how much and when employees are paid should make companies more accountable, but it's only a small step and there's no clarity on what action will be taken against companies that flout the new rules," Qadri said.

Companies which do not pay salaries on time under the new regulations can be fined up to 6,000 Qatari riyals ($1,650; 1,485 euros), be prevented from hiring new employees and bosses could potentially be jailed.

Failure to pay salaries on time, especially for unskilled laborers and tradesmen, has been one of the biggest complaints voiced by rights groups against companies in the energy-rich Gulf state.

An academic study from 2013, "Portrait of Low-Income Migrants in Contemporary Qatar," found that around a fifth of migrant workers were "sometimes, rarely or never" paid on time.

"The protection system has the potential to be a positive because one of the common complaints among workers is not being paid adequately and/or on time," Qadri said.

Since being chosen to host the World Cup 2022 global football tournament, Qatar has been criticized over lax worker safety, incomplete wages and the so-called "kafala" system under which employers may legally prevent employees from leaving the country without permission.

Coronavirus digest: Infections soar in US, Europe 12m ago

US judge delays TikTok ban after influencers sue 3h ago