With Russians heading to the polls on March 4, a hit song on YouTube against Prime Minister Vladmir Putin is heating up the campaign trail. The band - made of former soldiers - is calling for Putin to step down. 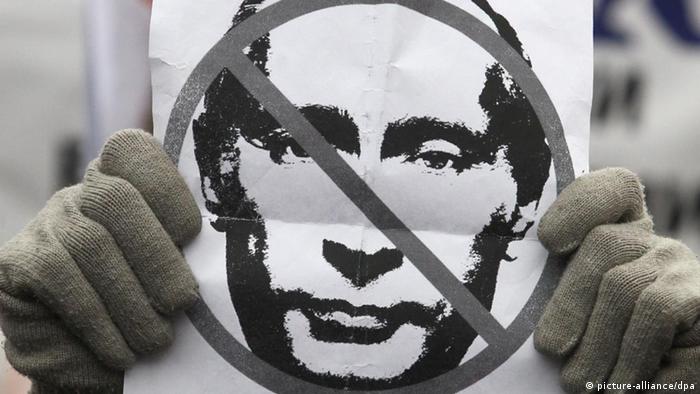 Picture the scene: a group of men, with shaved heads, tattooed forearms, and grim faces stand around a drum kit, some with guitars, wearing striped vests and the blue beret worn by Russian paratroopers. They are singing a song of reckoning against Prime Minister Vladimir Putin.

"We trusted you, but you lied for years," goes one line.

It could be the reproach of a rejected lover - until the song takes a bureaucratic turn.

"You're a simple civil servant, no tsar and no god."

They keep repeating the lines, challenging Putin not to contest Russia's forthcoming presidential election on March 4. 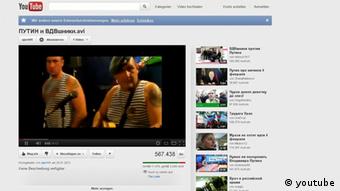 The four-minute video became an immediate hit on the Internet last week when a blogger, who is known across Russia, wrote about it in one of his posts.

More than 500,000 people have watched it since then on the social networking site YouTube. Thousands have left comments.

Some have voiced their support, saying things like "Great song! Nice one, boys!" and "We'll beat Putin's gang if we stick together!"

But others have accused the band of fraud: "They aren't real paratroopers!"

Mutiny of the elite

And this is what makes the hit so interesting - paratroopers have belonged to the elite of the Russian army since the Soviet-era and they are highly-regarded by society.

Until now, people believed the army would always stand by Putin because he has made it a central plank of his program to back the army in turn.

At least, that is the way it has always seemed.

Putin has often had himself photographed wearing army uniform - whether sitting in a fighter jet or board a submarine.

His government claims to be pushing ahead with a policy of modernization of the army, and says it is spending billions on new rockets, tanks and combat ships.

It begs the question: why would a group of paratroopers - above all others - want to protest against Putin?

Little is known about the band - not even its name. In the video, the band members say they are representatives of a veterans' organization for paratroopers from a suburb of Moscow.

And in a television interview, one of the singers, Mikhail Vistitsky, explained the band were "ordinary citizens, who do not want to live in a country in which theft and fraud are dominant." 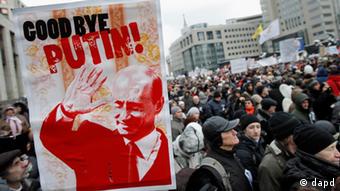 Putin wants to return as president - but opposition is strong

Vistitsky said he was currently working as a building contractor, but that he had served with Soviet Army in East Germany.

"Putin's pledge to modernize the army is a lie," he said, "and the official union of paratroopers sees it that way, too."

There is no evidence for Vistitsky's assertion on the paratrooper union's website - in fact, there is the opposite.

It features an article by the union's director, Pavel Popovscic, in which he says Putin has "fulfilled his duties as commander-in-chief well" and, citing Russia's second war in Chechnya, which Putin instigated, says the prime minister proved his worth between 1999 and 2004.

Popovscic ends on a warning.

There are turbulent times ahead, he says, while pointing a finger at the "messengers of the revolution" - meaning those leading the current protest.

The warning has done little to worry the band, whose Facebook site is decorated with the image of a white ribbon - the symbol of the movement for free elections.

"We will not hide," says the singer, Vistitsky.

They plan to play live at the next political rally in Moscow this coming weekend.

Russians have gathered in Moscow at rival demonstrations supporting and opposing Prime Minister Vladimir Putin, despite sub-zero temperatures. The anti-Putin rally is seen as a big test for the opposition movement. (04.02.2012)

Opponents of Prime Minister Vladimir Putin clogged Moscow's ring road with their cars to demonstrate for fair presidential elections in March. The activists hope to bring 50,000 protesters to the streets next Saturday. (30.01.2012)

While many middle-class Russians took to the streets in anti-Kremlin protests following elections last month, members of the working class have now begun to organize their own rallies in support of Vladimir Putin. (28.01.2012)

A visit to a Siberian village