Russian President Vladimir Putin has arrived in Crimea, the annexed territory that once belonged to Ukraine. His visit comes shortly after he accused the government in Kyiv of a military incursion into the territory. 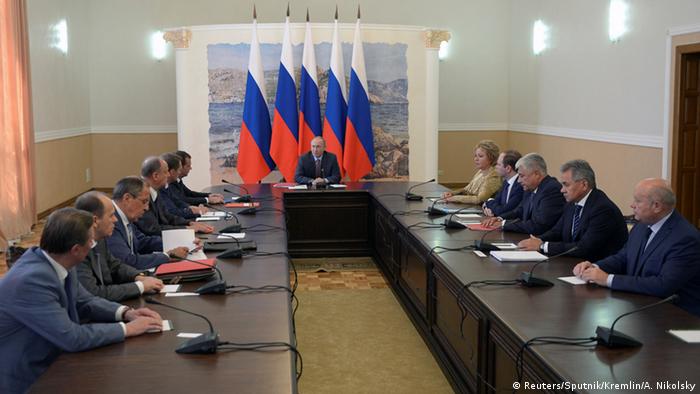 The Russian president on Friday chaired a meeting of his security council in the Black Sea peninsula, his fifth visit to the territory since Moscow annexed it from Ukraine in 2014.

While meeting to discuss additional security measures as conflict continues to flare in eastern Ukraine, Putin also took the time to criticize Kyiv, accusing the government of an attempted incursion.

"We have gathered because of the well-known incident, after stopping an attempt by Ukrainian army sabotage groups to stage an incursion into Crimean territory," Putin said.

Tensions flare on the border

Last week, tensions escalated between Moscow and Kyiv after clashes were reported between Russian forces and Ukrainian "saboteurs." The incident led Russia to hint at the possibility of cutting diplomatic ties with Ukraine completely.

The tensions also led Ukrainian President Petro Poroshenko to put his country's military on high alert and to deploy tanks to the border with Crimea. On Thursday he said he considered the likelihood of an escalation "high" and could not rule out a "full-scale Russian invasion along all fronts."

On Thursday, at least three Ukrainian soldiers were reported killed after intense shelling by pro-Russian rebels in the east. Poroshenko said the government might respond by instituting martial law.

Russia also reported on Friday that the new S-400 "Triumph" air defense system had been installed in Crimea. The announcement came as the UN Security Council was holding a meeting in New York at Kyiv's request.

Ukraine's ambassador to the UN, Volodymyr Yelchenko, called on Russia to provide evidence that the country had attempted to "sabotage" Crimea.

"If it happened in reality, where are the proofs? Statements, pictures, photos, videos, whatever," Yelchenko said. "They are only words."

The top diplomats of Germany and Russia have discussed the conflict in eastern Ukraine in light of rising tensions over Crimea. Both called for restraint amid fears that the region could be further destabilized. (15.08.2016)