Punishing those who help refugees - ′a perverse logic′ | Europe | News and current affairs from around the continent | DW | 18.05.2017

Punishing those who help refugees - 'a perverse logic'

Aid workers or human traffickers? Legal uncertainty in Europe has hampered people's willingness to help refugees. What is legal, and what will be punished? 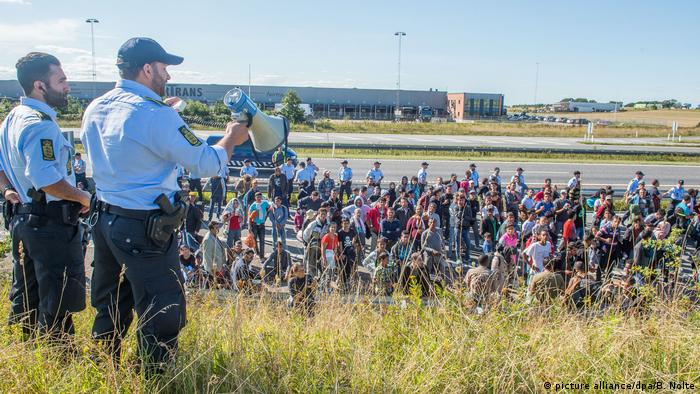 Refugee aid workers have received awards around the world for their service. Just this April, German Chancellor Angela Merkel honored hundreds of volunteers, inviting them to the Chancellery. "Yet, there is a dark side to aid as well, one not often discussed in the media," says Pavel Trantina, a representative of the European Economic and Social Committee.

In EU member states like Spain, Denmark and Hungary, people aiding refugees within national borders by helping them travel, or offering them shelter, could face legal punishment for violating the law. Many such instances fall under the purview of judges at the national level. Jennifer Allsopp, an immigration researcher at Oxford University, explains that the problem lies in the definition of the term "humanitarian help."

"Critics say that volunteers trying to find safe routes for immigrants have blood on their hands, because their work only encourages more immigrants to undertake the journey," says Allsopp. "That is a perverse logic. Because in the end, those volunteers are simply trying to safeguard human dignity."

A lot of work must be undertaken behind the scenes because of volunteers' fears: Police, doctors and landlords, for instance, are often uncertain about how to act.

"There is a gray area," says Allsopp. "The definition of humanitarian aid is a Pandora's box for the EU. And the EU doesn't want to open it."

Danish author Mikael Lindholm, and his wife, children's rights activist Lisbeth Zornig, have entered that gray area. On September 7, 2015, Zornig witnessed a bizarre spectacle in the news: Hundreds of men, children and pregnant women were walking along the freeway from the Danish island Lolland toward the Swedish border. They walked past police, who silently watched as the refugees went by.

Lisbeth Zornig called her husband and explained that she had to drive that stretch of road later and asked if she could take a family with children part of the way. Lindholm answered, "I don't know." Local police were uncertain about the legal situation at the time as well. So Zornig decided to invite a Syrian family - four adults and two children - to get into her car. At home in Copenhagen, her husband offered the Syrians coffee, tea and cinnamon rolls. Later, he drove them to the train station, where he bought them tickets to Sweden. 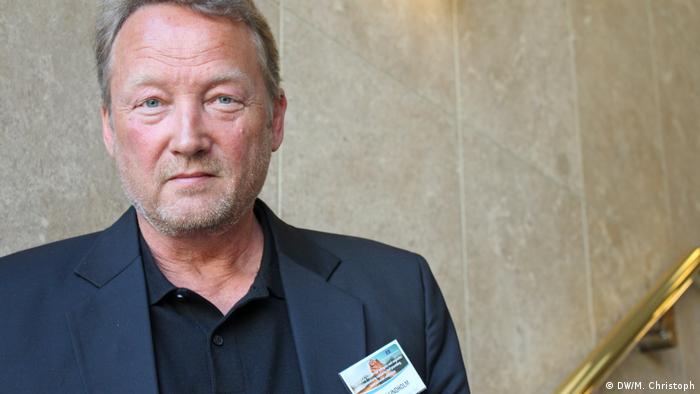 That landed Lindholm and his wife in the Washington Post newspaper criticising the Danish government for taking "a nasty turn on refugees."

The Lindholm and Zornig case highlights a problem that has only recently been recognized as such by the European Union. Paula Schmid Porras, a Spanish attorney specializing in international and European law, says that the so-called "humanitarian clause" is part of that problem. Six months ago, Porras and several convicted refugee helpers met with EU Commissioner Dimitris Avramopoulos, who flatly denied that such cases exist, she says.

Some 300 people in court

Currently, Porras is working on a similar case: When the body of the young Syrian refugee Ailan washed up onto the beach in Bodrum, Turkey, in the fall of 2015, Manuel Blanco, Enrique Rodriguez and Julio Latorre decided they could no longer stand by and watch the refugee tragedy go on unimpeded. The three Spanish firemen traveled to Greece in December 2015 to work as volunteers helping save refugees from drowning for the NGO Proem Aid on the island of Lesbos. Later they were brought before a Greek judge who sentenced them to up to 10 years in prison for the illegal transportation of immigrants.

The United Nations defines human trafficking as an act motivated by "financial or material gain." Yet that is not legally binding in Denmark. Attorney Porras says that European guidelines also allow member states to decide whether to classify refugee aid as "humanitarian aid" or to criminalize it. According to police statistics, charges were brought against some 300 people in Denmark between September 2015 and February 2016. 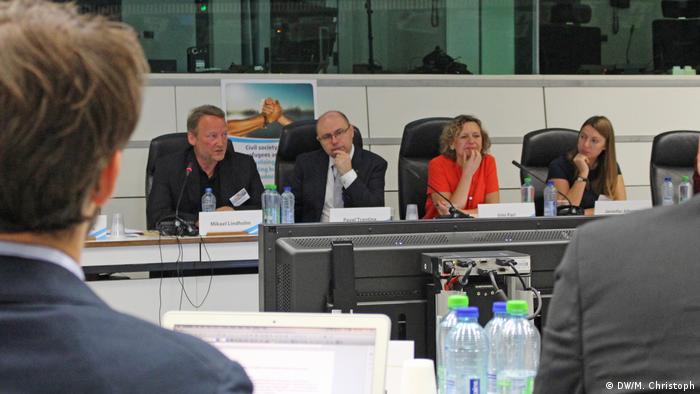 Lindholm speaks in Brussels about his categorization as a human trafficker

"These cases must be dealt with on an individual basis," says Agnieszka Sternik, a representative for the European Commission in Brussels. Ultimately, each case is unique, says Sternik. She says that the criminalization of refugee aid is a misunderstanding: "No one that offers humanitarian assistance should be charged with a crime."

Nevertheless, there is no binding definition of the term on a European level. The interpretation of the "humanitarian clause" remains at the discretion of judges at the national level.

Lack of political will from EU member states

Thus far, proposals put forth by international aid organizations like the European Red Cross, calling for support of legal paths to immigration, family reunification or humanitarian visas, have yet to be initiated by member states. Red Cross representative Sabrina de Noach says there are no clear definitions of the issue, "nor is there any political will on the part of EU member states."

Lindholm and Zornig stand by their deed. "Some called us heroes, others condemned us," as Mikael Lindholm told DW in Brussels. But he considers himself neither a hero, nor a victim of the legal system. "We only received support from politicians behind closed doors. That was it. The laws have to be rewritten. Europe is in the middle of a historic situation right now."

Little has changed in German public opinion on the large influx of refugees since the fall of 2015, according to a new study. Readiness to help is also about the same, though there is skepticism in the East. (12.05.2017)