Argentina says a pulp mill in Uruguay is fouling the air and water on its side of the border. The two nations are likely to wind up in front of the International Court in The Hague for a second time. 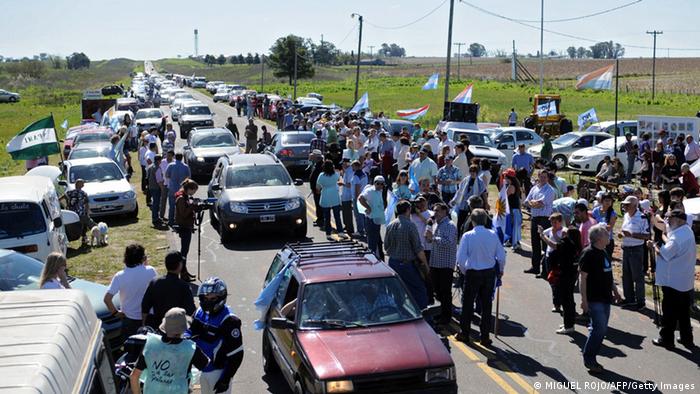 Argentine environmentalists from the city of Gualeguaychú are enraged over plans to increase production at the Fray Bentos pulp mill over the border in Uruguay. Run by Finland-based multinational UPM, the mill produces cellulose, which looks like thick white cardboard. It then ships the cellulose to UPM's paper plants in Europe and Asia. 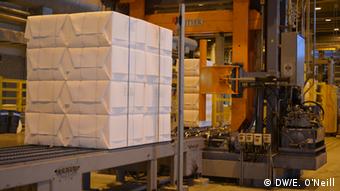 Cellulose from the UPM mill is shipped to Europe and Asia

Matías Martinez, a spokesperson for the mill, said Uruguay and its small-scale ranchers reap huge economic benefits from UPM's presence in the country. The company plants trees on the land of small-scale cattle ranchers, and the cattle benefit from the shade, he said. Currently, 50 percent of the plant's timber comes from the fields of such small-scale ranchers.

According to Martinez, the company and its timber suppliers employ 3,400 Uruguayans, three hundred of them professionals with university degrees. The company's economic output comprises 1.3 percent of Uruguay's GDP, he added.

But on the other side of the river, in Gualeguaychú, Argentina, residents say the mill's economic benefits come at a high cost. They say the water and air are being polluted and the clean-up will be expensive.

Ana Angelini, a lawyer and a member of the Environmentalist Assembly of Gualeguaychú, has been opposed the pulp mill since 2005, when the Uruguayan government first gave UPM permission to construct the mill. "Every day, we're attacked by the gases released by the mill's smokestack," she said. "The mill also pollutes the water that we normally use for recreation."

Angelini was among the protestors who took part in a three-year blockade of the bridge between Gualeguaychú and Fray Bentos. "We spent many nights around campfires [on the highway], where there was no shelter and it was cold," she recalled. The whole Argentine town was camped out at the blockade, she said. "It was a huge sacrifice." The bridge is a major international thoroughfare, and many of those who used it to get to work lost their jobs during the protests. 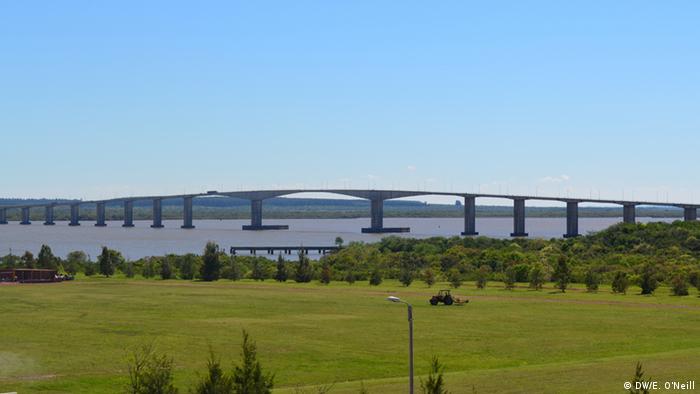 The bridge over the Uruguay River, which marks out the border, has been the site of protests against the mill

The Argentine government has already taken Uruguay to the International Court at The Hague over the pulp mill. According to Argentina, Uruguay violated the bilateral Uruguay River Treaty by constructing the mill without Argentina's consent and by polluting the river.

In 2010, the Court said that Uruguay had indeed violated the treaty by installing the mill. But it also said that Argentina had failed to prove that the mill polluted the river.

Neil McCubbin, a Canada-based pulp mill expert, says Argentina made its case with out-of-date evidence. "They're taking mills from the 70s and 80s and showing what damage they did. And they're quite right," he said. But this mill is different, he added. "What they are doing is a bit like saying, 'Horses leave manure on the streets. Therefore, you shouldn't have any vehicles in the streets.'"

McCubbin investigated the Fray Bentos pulp mill's environmental impacts for the World Bank. He later testified in favor of Uruguay at the International Court at The Hague, calling the accusations of olfactory pollution "rubbish" and describing the UPM facility as a model mill. "I've been in a hundred-odd mills, and that's up there with the best modern mills," he told DW. 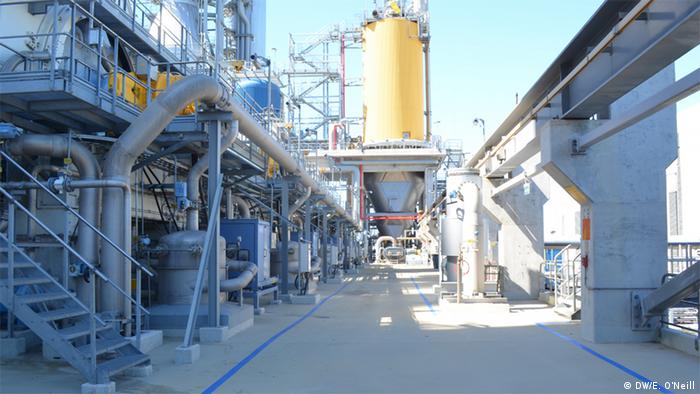 World Bank inspectors say UPM's facility is "among the best"

There are potential pollutants resulting from the pulp milling process, said McCubbin, including dioxins from the bleaching process, sulfuric gases, and organic compounds like phosphorus and nitrates.

However, he says, modern bleaching processes using chlorine dioxide have significantly reduced dioxin release. He adds that the Fray Bentos pulp mill captures the sulfuric gases it produces and burns them before they can be released. And he says the organic compounds released in the mill's effluent are well below allowed international levels.

'We don't want any pollution'

But those allowed levels are still too high, said Gustavo Rivollier of the Environmental Assembly of Gualeguaychú. "Why do I have to accept the criteria of someone who says that I have to accept some level of pollution? I don't want any pollution."

The river had its own problems, he said, because the cities along its banks are already polluting it. "A company from 13,000 kilometers away, in Finland, says, 'We're going to build a factory here.' And permissive Uruguay says, 'Build the factory; we'll change the norms to fit your needs,'" Rivollier said.

Rivollier also claimed that a number of irregularities were reported by the foreign minister. "There were clandestine dumping sites, bypasses within the company, malfunctioning of the treatment plant, prohibited pesticides."

Argentine environmentalist Antonio Brailovsky pointed out that although endosulfan, an insecticide, was found in the river, it likely came from the soy farms on both sides of the river, and not the pulp mill.

But the protest in Gualeguaychú continues. Anti-mill signs have been put up in parks and business around the town and more protests on the bridge are expected. 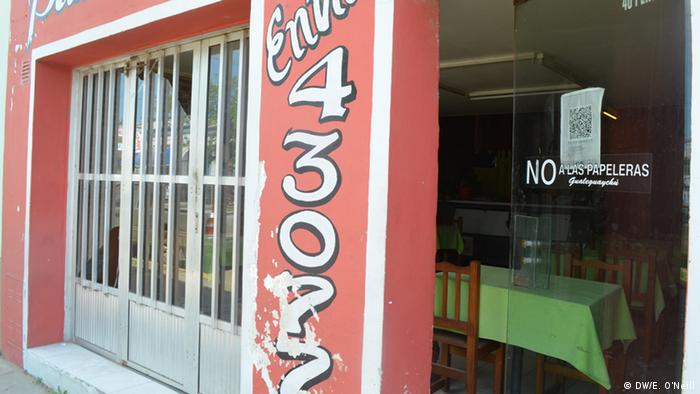 The Argentine town of Gualeguaychú has united against UMP, with many displaying anti-paper mill signs in their windows

Back at Fray Bentos, production at the pulp mill is booming. Around 350 logging trucks enter the company each day. Inside the factory, sheets of cellulose travel down long conveyor belts before getting packaged and loaded onto ships, which are bound for Europe and Asia.

90 percent of Buenos Aires' waste ends up in landfills. Thanks to trash collectors, at least some of it gets recycled. The city government now finally tries to comply with its own zero garbage law, passed in 2008. (19.07.2012)