Public Viewing Takes on New Dimension at World Cup | News and current affairs from Germany and around the world | DW | 24.06.2006

Don't have a ticket? No problem. Millions of soccer fans across Germany are showing that they can have just as much fun watching the World Cup games outside of the stadiums. 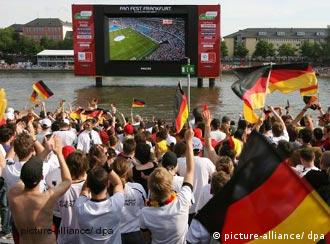 Over half a million fans in Berlin watched the German team win against Ecuador on Tuesday along the city's fan mile and they're bound to regroup for Saturday's match against Sweden -- proving that you don't have to be in the stadium to revel in the charged atmosphere surrounding the duels.

Tens of thousands of English fans have come across the channel to watch their team's matches, even without tickets. The 2-2 draw against Sweden on Tuesday was just as much fun to watch on the big screen as in Cologne's stadium.

For the first time in World Cup history, FIFA, the Organizing Committee (OC) and the host cities have developed a joint concept to allow fans to experience the month-long excitement of the Cup even without a ticket -- and for free. All of the host cities -- 12 in total -- have organized a so-called "Fan Fest": official public viewings along with a supporting program of music, shows and cultural events.

"In view of the enormous public interest, we felt an obligation to bring the FIFA World Cup atmosphere to those fans that could not get their hands on a ticket," said OC president Franz Beckenbauer.

Bringing together the soccer community

Public viewing events gained a reputation for the first time at the 2002 World Cup in Korea and Japan. Some 2.8 billion people around the world followed the 64 games in public squares, halls and bars. FIFA said it expected around 30 percent of the German population to follow the games at this World Cup via public viewing, plus hundreds of thousands of foreign guests.

Back in 1930, soccer fans had to crowd around the radio to hear the reports from the first World Cup in Uruguay. Although the 1936 summer Olympics in Berlin were televised and marked the first television coverage of a sports happening in the world, radio continued to be the medium used to follow international sporting events. 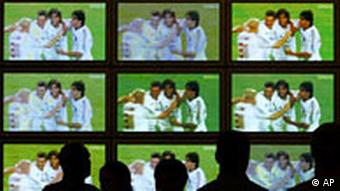 Can we see that goal again?

The World Cup in soccer was first televised in 1954. With the introduction of television into more people's homes after World War II, listeners became viewers. In some countries, not everyone had a television, so they would be carried out into the street so that entire neighborhoods could watch. This is still the case in many developing countries today. The community atmosphere was also felt at local pubs or cafes, once they introduced television.

In Germany, many fans have decided to get up off their sofas and follow the World Cup games on big screens in public viewing areas or on television in beer gardens, pubs and any other place offering a television set.

The official organizers of the fan fests are not FIFA or the OC -- even if the official tournament sponsors are represented for refinancing reasons -- but the host cities themselves or agencies contracted by them. 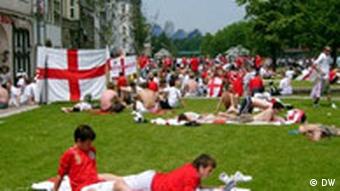 These English fans in Cologne didn't only leave good spirits behind, but also litter

"There is a certain budget for all the host cities to work with," said Simone Winkelhog, spokeswoman for the city of Cologne, which had a lot of cleaning up to do after the England-Sweden game on Tuesday.

The Swiss company Infront Sport & Media, owned by German soccer legend Günther Netzer, handles the global sales of all the broadcast rights for the 2006 World Cup and is also responsible for the host broadcast.

"We decided at an early stage to agree on a special rule for the commercial public viewings in all 12 host cities and to provide these with free licences," Netzer said. "This is a gesture to the cities, which are making a vital contribution to the success of the World Cup, and above all to the fans and visitors."

Other commercial events, for example those that charge viewers for a spot in front of the screen, require a license. According to Infront, all revenues raised from commercial license sales will be donated to the charity SOS Children's Villages and the official charity campaign of the 2006 World Cup, "Six villages for 2006."

More than 800 towns and communities also registered non-commercial events with Infront. Pubs and beer gardens in Germany don't have to pay any license fees to broadcast the matches.

Berlin is the German city that's profiting most economically from the crowds of foreign World Cup tourists descending on the country. Aside from watching games, some visitors are spending a fortune. (June 16, 2006)

Japan's national soccer team, and many of their countrymen and women, is staying in Bonn this month during the World Cup. DW-WORLD.DE talked to both Germany’s guests from the land of the rising sun and their hosts. (June 21, 2006)