Protests paralyze India's JNU as government cracks down on dissent

Thousands have protested at one of India's top universities after its student union president, Kanhaiya Kumar, was arrested for anti-India slogans. Kumar questioned the execution of a Kashmiri separatist in 2013. 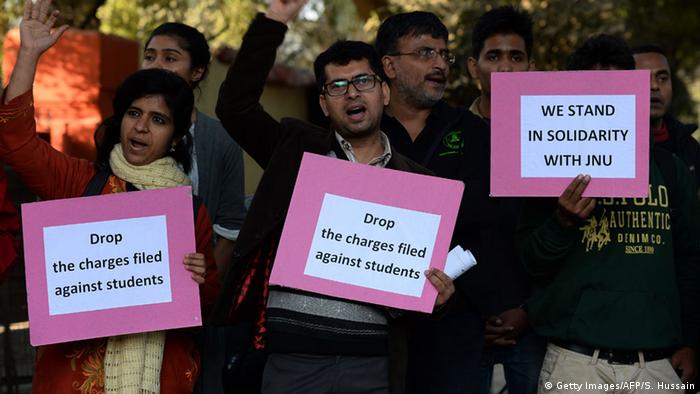 Students of Jawaharlal Nehru University (JNU) called for a strike on campus and protested student union president Kanhaiya Kumar's arrest over the weekend.

News agencies reported ugly scenes in front of the Delhi court, where Kumar was being presented on Monday.

A female correspondent from Indian broadcaster NDTV said several journalists and students had been beaten by supporters of India's ruling Bharatiya Janata Party (BJP). She herself was threatened with physical assault while trying to record the violence on her phone.

Dozens of police officers were stationed outside the court, but eye witnesses said they did not do anything to stop the violence. BJP supporters chanted slogans calling the university students and reporters anti-national and asked them to go to Muslim-majority Pakistan.

Delhi police commissioner B.S. Bassi downplayed Monday's violence, saying "to my knowledge, no one has received any serious injuries." He defended Kumar's arrest, saying the student had "raised anti-India slogans and that's why he was arrested."

Kumar was taken into police custody on Friday, days after he gave a speech questioning the hanging of Afzal Guru four years ago for planning an attack on India's parliament in 2001.

The maximum punishment for sedition in India is life imprisonment.

Representatives of India's ruling party voiced their unambiguous support for the government's decision, with Prime Minister Narendra Modi's close aide Amit Shah saying, "I can assure you that every action we take is to protect our country. Any anti-India activity will not be tolerated."

Kumar's arrest and his questioning of Afzal Guru's execution led many people to demand the left-leaning university's closure, with several public personalities and citizens tweeting against the institution.

An attempt to silence dissent

Political commentators said the government's move was an indication of intolerance to freedom of opinion. "The arrest of Kanhaiya Kumar and the crackdown on political dissent at JNU suggest that we are living under a government that is both rabidly malign and politically incompetent," Pratap Bhanu Mehta, head of New Delhi-based think tank, Center for Policy Research, wrote in an opinion piece over the weekend.

Afzal Guru was hanged on February 9, 2013 for his role in carrying out terror attacks in India's parliament over a decade ago. Human rights activists have argued that Guru was not given a fair trial.

Guru's hanging is a sensitive issue in Kashmir - a constant bone of contention and the reason for three wars between India and Pakistan. Sentiments regarding Kashmir run high in both countries.

Indian historian Romila Thapar talks to DW about the ongoing protests by intellectuals over increasing intolerance in India, and about what this means for society if the trend is not arrested. (03.11.2015)