Hundreds of protesters have marched in Hong Kong against the banning of six candidates from upcoming elections. So-called "localists" are worried about China's creeping interference in the city's affairs. 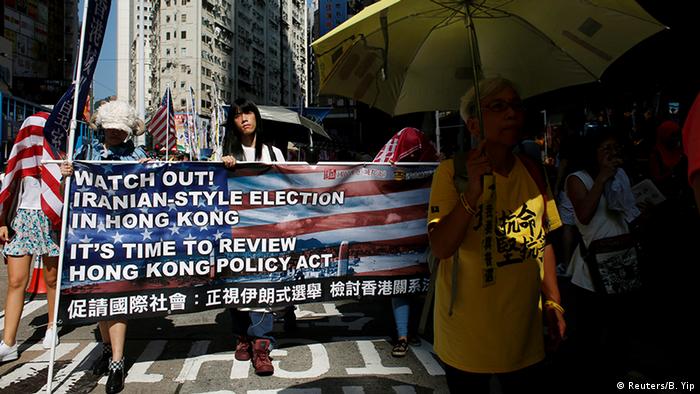 Several hundred protesters marched through Hong Kong on Sunday against the banning of six candidates from running in early September legislative elections, in a sign of growing anger at meddling by China in the affairs of the city.

Andy Chan, from the pro-independence Hong Kong National Party, has been disqualified from September's legislative polls. Beijing and Hong Kong officials say his views go against the city's Basic Law. (30.07.2016)

The candidates were barred from the election for their advocacy of a split from China, which in 1997 took over Hong Kong from the British, under an agreement that gives the city semi-autonomous status.

Among the "localist" candidates barred were those calling for independence and reuniting with Britain.

Protesters marched chanting slogans like "Give me back fair elections!" and "Defend freedom of speech," while carrying banners that read "No political vetting!" and "Watch out! Iranian-style election in Hong Kong!"

Critics of the decision say it is the latest sign of Beijing interfering in the city's affairs, from everything from media and education to politics. China's refusal to grant full democracy led to 2014 protests and growing calls for separation.

"I hope that people are aware of the political vetting. It is something that every Hongkonger should be concerned about because damage has been done to the rule of law as well as fairness in elections," protest organizer Jimmy Sham Tsz-kit, of Civil Human Rights Front, told reporters before the rally.

Organizers said at least 1,300 protesters participated, but police put the number at about 760.