Hundreds of environmental activists have occupied an open-pit mine in eastern Germany that supplies lignite to a nearby power plant. Dozens were arrested during the second day of protests against coal. 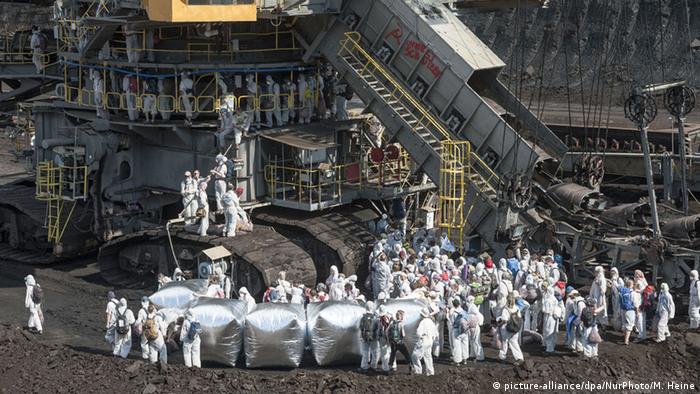 Protesters from across Europe temporarily blocked a railway line on Saturday that feeds coal to the Schwarze Pumpe - or "Black Pump" - power station near Cottbus, in the eastern German state of Brandenburg.

On Friday the protesters had already occupied the nearby lignite strip mine at Welzow, which feeds the massive power plant run by the Swedish utility Vattenfall. The company said around 500 activists had spent the night at the Schwarze Pumpe facility ahead of Saturday's demonstration.

According to a statement from the environmental group "Ende Gelände," at least 1,600 people took part in the protest. Police put the number of participants blocking the rail line at up to 1,000.

"Germany is the world leader in burning dirty coal," said Hannah Eichberger, a spokeswoman for Ende Gelände. "Therefore we are taking the exit from coal into our own hands and closing down one of the largest climate killers in Europe."

Vattenfall had requested that police intervene, citing a danger to equipment and safety as well as trespassing.

But quoting a decision from the local prosecutor, police said they would not intervene. The local prosecutor's office found no grounds for a trespassing complaint because not all of the land was fenced off and protesters had not disrupted operations at the facility, since the utility had closed it down on Thursday in anticipation of the protest.

Vattenfall security officials came to blows with members of the environmentalist alliance. A police spokeswoman said 120 people were arrested, and two activists were injured in the commotion.

Germany has pushed to increase renewable energy, such as wind and solar power, in its energy portfolio. But a decision to shut down nuclear power after the 2011 Fukushima nuclear disaster in Japan has also left it reliant on dirty and readily available coal to produce power.

Greenpeace: A history of confrontation