Protesters in Poland fear unraveling of democracy | Europe | News and current affairs from around the continent | DW | 09.01.2016

Protesters in Poland on Saturday said they want to send a signal to the new government that democracy and a free media in the post-communist country will not be eroded. Jo Harper was at the rally in central Warsaw. 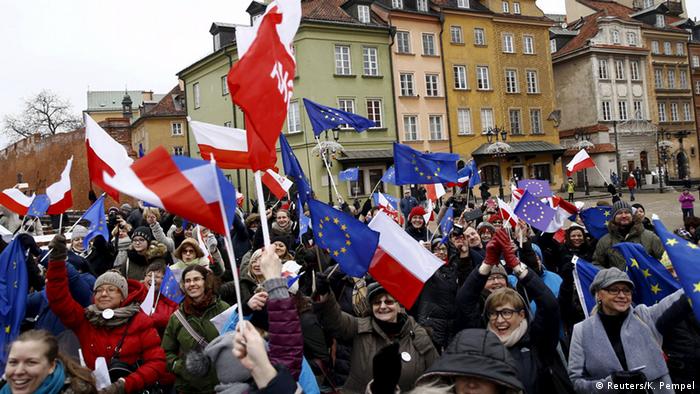 The Polish government has proposed a law to allow the treasury minister to appoint public media bosses. Talking to demonstrators on Saturday, uncertainty and fear were perhaps the dominant moods expressed.

"We don't trust the [governing Law and Justice party's] motives behind what it's doing, not just in the media law, but generally. What do they want to achieve?" asked 40-year old Ewa, at the demonstration with her two small children. "We came today to show our faces, give some support. Poland is not only PiS," Ewa said, using the party's acronym.

"It's part of the PiS power grab, basically taking over all the key institutions," Piotr, a Warsaw resident, originally from Silesia, said. "They [PiS] want to create their Poland and make us all follow," he went on.

Joanna Srednicka, who runs a training company in Warsaw, said public television was never totally apolitical, but that PiS is now making a show of power. "This is worrying. Both sides are playing on a series of themes that unsettle people, and both want to give the impression of things being done. For the PiS government this is a show of power, but as yet there is very little actual movement. The demonstrations are a counterweight to that," she added. 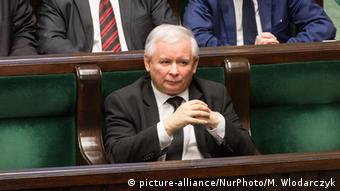 Others, meanwhile, recognized that PiS won a majority in parliament in October's election, but were concerned the government was moving too fast.

"I think people who didn't vote for PiS are here mainly, and perhaps some of them don't really understand the other Poland, the one that did," says Rafal, an IT consultant from Warsaw. "But we don't like what PiS seems to want to do, creating fear and polarizing society," he went on.

"PO [centrist Civic Platform party] was also political and I didn't much support the previous public media line either. But PiS wants to institutionalize the process. The issue for me is what Kaczynski wants ultimately to do in Poland. We don't know his master plan, if he has one," said Srednicka, refering to Jarolsaw Kaczynski, head of the ruling Law and Justice Party.

Gavin Rae, a lecturer at the Kozminski University in Warsaw, believes Kaczynski doesn't really have a defining mission. "PiS is trying to shift the discourse of state in a more traditional direction, and wants to institutionalize this," Rae says. "It seems to me that they are trying to create a form of national capitalism and a more authoritarian state."

Nicholas Richardson, a British lawyer living and working in Warsaw, said the sort of change being proposed is nothing new in a country “which does not have an apolitical civil service and where state-controlled companies form both an important part of the economy and an important source of lucrative jobs for friends and supporters of the government.” 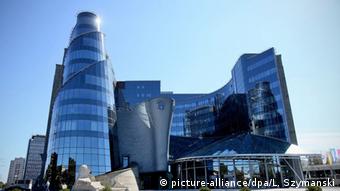 The headquarters of Polish television, TVP, in Warsaw

"All incoming governments engage in this type of behavior and in politics, what's sauce for the goose does have a habit of becoming sauce for the gander. But I think the fear that Poland is going to be another Hungary is overstated [which has swung far to the right under Prime Minister Viktor Orban,ed.]. The constitutional arrangements and political majorities are different. There is no recession in Poland, and Poles are not Hungarians. There is no room for complacency, but nor is there a need for blind panic," Richardson continued.

Others said they are concerned that Kaczynski may harbor more sinister ambitions, aiming to create an ‘Orbanized' Polish state, with a strong nationalist and Catholic message, via the media, schools, and in all areas of public life.

"Kaczynski apparently stopped reading many years ago and has a very one-sided view of the world," Srednicka believes. "How he is talking sometimes feels like an inversion of communistic thinking. But what is happening now could also be refreshing for democracy. It reminds us what we fought for in 1989."

"We want the government to hear us, to understand that many people are unhappy with what it is doing to erode media freedoms in Poland," according to Hanna Skulczewska, the press spokesperson for KOD (Organization for the Defense of Democracy), which is organizing events nationwide. 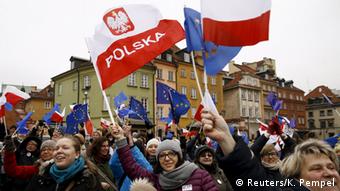 Anti-PiS protesters say they're worried about too much control

"PiS cannot change the constitution as it doesn't have two thirds of the seats in the 460-seat parliament, but they are pushing the limits of what is acceptable in a democratic society," Skulczewska said.

Skulczewska pointed to two proposed laws. "One increases the government's right to monitor private citizens' emails under proposed anti-terrorism legislation. They may also try and make it harder to organize rallies such as this one in the future. Democracy needs to have strong mechanisms to protect itself from arbitrary power."

"All governments of course play with the composition of key institutions, that is politics, but they usually do it quietly. PiS is the opposite," she says. We don't know what the PiS plans are, but any consolidation of power like this is potentially dangerous.”

The truth lies somewhere inbetween. "While there are legitimate grounds for some concern, there is also a strong whiff of sour grapes from the chatterati for whom PiS's conservative social policy is beyond the pall," says British lawyer Richardson. "The sad fact is that Poland has not yet developed the depth of respect for the rule of law and democratic values that are taken for granted elsewhere."

Viktor Orban has said Hungary would veto any EU action against Poland over concerns about the deterioration in the rule of law. Poland and Hungary look to be cozying up against Brussels. (08.01.2016)

Polish President Andrzej Duda has approved the law, which gives the government more control over state news organizations. Brussels has repeatedly spoken out against the bill, insisting it could violate free speech. (07.01.2016)

The Polish government has asked for an EU official to meet for talks on a new media law has had Brussels mulling sanctions. At the same time, press groups filed a complaint with the Council of Europe over the statue. (05.01.2016)