Prosecutors in Taiwan have arrested the developers of a high-rise apartment building that collapsed after a strong earthquake. Thirty-nine people were killed in the quake, most of them within the block of flats. 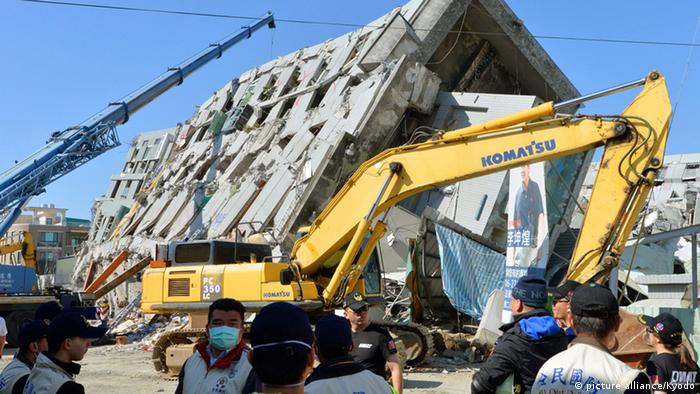 Prosecutors in Tainan have arrested the developers of a building which collapsed during the earthquake on Saturday, February 6, resulting in the deaths of at least 39 people.

According to Taiwan's official Central News Agency, the Tainan District Prosecutors Office said that Lin Ming-hui and two of his employees, who were identified only by the names Chang and Cheng, stood accused of negligence resulting in death. Authorities said they suspected careless construction to have contributed to the disaster, as the block of apartments in Tainan was the only major building to be destroyed in the quake.

Prosecutors have launched an investigation after photographs emerged showing that cans and foam had been used to fill parts of the Wei-guan Golden Dragon Building's concrete framework, which was built in 1989. But the prosecutor's office had reportedly only requested their detention in order to prevent any disruption to the ongoing investigation into the collapse. A hearing had been scheduled for later the same day.

The death toll in the quake stood at 41 on February 9, with all but two of the deaths being related to the building collapse. More than 100 people are believed to still be trapped in the debris while at least 210 people had successfully been rescued from the building. Five of the survivors were believed to have been pulled out on Sunday, February 7, and at least four were pulled out as late as Monday, February 8. Among them were a 42-year-old man and an 8-year-old girl.

Due to strict construction standards in force in Taiwan, which is frequently struck by tremors, only few buildings took any damage. Most earthquakes in Taiwan are relatively minor and cause little or no damage. However, a magnitude 7.6 quake in central Taiwan killed more than 2,300 people in 1999, prompting an overhaul of existing building codes.

More than 100 still missing after earthquake in Taiwan

Rescuers have pulled more survivors from the remains of a high-rise apartment block which collapsed in Taiwan after a powerful earthquake. Many remain buried in the ruins, as hopes of finding survivors grow dim. (08.02.2016)