An investigation into the Bad Aibling train crash has led prosecutors back to a mistake made by a train dispatcher. An involuntary manslaughter investigation has been opened against the 39-year-old man. 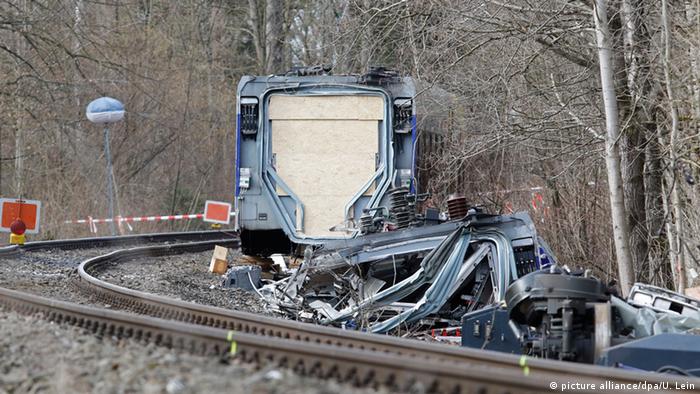 Prosecutors and police held a press conference on Tuesday in Bad Aibling, the site of a deadly head-on train crash last week that killed 11 people including both conductors, to share the initial results of their investigation into the crash.

Lead prosecutor Wolfgang Giese began the press conference by saying the accident was caused by human error on the part of a train dispatcher.

"Had the dispatcher acted in accordance with the rules, as bound by his duty, the accident would not have happened," Wolfgang Giese told reporters. Investigators have said there are no indications of a technical fault.

Prosecutors have opened an involuntary manslaughter investigation against the 39-year-old man. On February 9, two trains traveling toward each other on the same single track collided in the southern Bavarian town of Bad Aibling. In addition to the 11 people killed, 24 people suffered severe injuries and 61 were lightly injured.

While the exact details of the series of events that led to the crash are still being determined, prosecutor Jürgen Branz said "a special signal was activated that shouldn't have been," and that "what we have at the moment is a single, terrible failure." He added that after the dispatcher noticed his mistake, he sounded a distress call, but this was not heeded. Investigators are still looking into who may have also had the chance to prevent the crash.

Robert Kopp of the regional police precinct said that tests conducted on both of the drivers who were killed in the crash showed neither had any alcohol in his system. Branz said a test of the dispatcher taken after the accident also showed that he had no alcohol in his blood. A test of the man's blood to check for drugs has been completed but not yet evaluated.

After the accident, the dispatcher exercised his right to remain silent and consulted with an attorney. On Monday, he met with prosecutors and delivered a detailed statement about what happened the day of the accident. He is not being held in custody but has been taken to a safe location where he is available to prosecutors, the investigators said.

After the crash in Bavaria, train travel safety is a hot topic. The EU doesn't have common standards yet, but a system called ETCS is being developed. DW explains it and looks back at recent train disasters in Europe. (10.02.2016)

Two passenger trains have collided head-on near the town of Bad Aibling in the southern German state of Bavaria. Police reported that at least ten people have been killed and 108 injured. (09.02.2016)