Progress on power plant, fears about food in Fukushima | World| Breaking news and perspectives from around the globe | DW | 23.03.2011

Progress on power plant, fears about food in Fukushima

While the situation at the Fukushima nuclear plant remains critical, engineers appear to be making some progress toward preventing a nuclear catastrophe. However, radiation already leaked is finding its way into food. 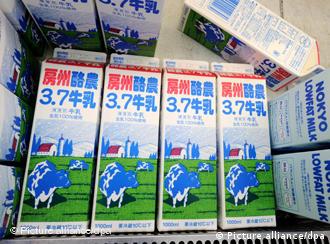 Milk is among the products showing signs of radiation

Engineers working to prevent a major meltdown at the Fukushima nuclear power plant on Japan's east coast appeared to make progress, but concerns remain about higher-than-normal levels of radioactivity.

The engineers have reconnected power cables to all six of the plant's reactors and a water pump has been started at one of them to help cool fuel rods that are threatening to overheat.

Late on Tuesday, the Tokyo Electric Power Company (TEPCO) also announced that its workers had managed to restore lighting to the control center for reactor No. 3.

Despite this progress, the United Nations' nuclear watchdog has warned that Fukushima is still emitting radiation.

“We continue to see radiation coming from the site… and the question is, where exactly is that coming from?” James Lyons, a senior official with the International Atomic Energy Agency (IAEA) told reporters in Vienna.

One of the biggest concerns has been increased levels of radiation found in milk and vegetables. Although the government insists there is no health risk, food shipments from the area have been stopped.

"Food products that present abnormal levels [of radiation] will not appear on the market, so please don't worry," said Japan's Consumer Affairs Minister Renho. "And even if you put such foods in your mouth, they will not have an immediate health risk." 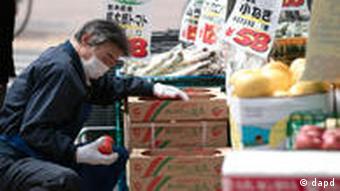 The health ministry also advised against using tap water in baby formula, as the water in certain towns in the Fukushima prefecture contained radioactive iodine levels higher than what is allowed for babies.

Tests of seawater near the Fukushima plant have revealed levels of radioactive iodine that are higher than normal, leading to fears that seafood may also be contaminated.

Despite claims by Japan that the levels of radiation present in food products are not harmful, France has urged the European Commission to impose "systematic controls" on fresh food imports into the European Union.

Hundreds of thousands of people in the region still have no power or running water, and many are still living in evacuation centers after being forced to leave their homes as a precaution due to concerns over radiation.

Who is to blame for Fukushima?

People are worried about the future of Japan's northeastern coast and want to know who is to blame for the nuclear disaster at the Fukushima nuclear power plant. Peter Kujath believes the plant's operator is to blame. (21.03.2011)