Voters in Serbia signaled they wanted increased ties with the west and hoped to avoid the isolation of the Milosevic era when they voted Sunday for Boris Tadic, a pro-EU reformer, in presidential polls. 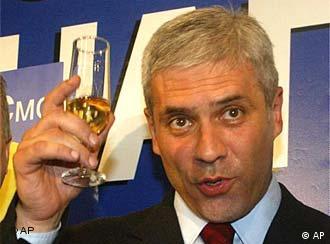 With 53.5 percent of the vote, 46-year-old Boris Tadic, a pro-western liberal of the Democratic party of assassinated prime minister Zoran Djindjic, won the crucial presidential election in Serbia Sunday.

Tadic defeated challenger Tomislav Nikolic, a hardline ultranationalist,whose Radical party propped up Milosevic's regime and supported his military adventures in the 1990s. Nikolic got 45.1 percent of the vote according to independent monitors from Belgrade's CeSID group.

The presidential election was widely seen as crucial to determine whether Serbia would move towards the EU and adopt western-style reforms or whether it would lapse into the nationalist isolation and diplomatic wilderness of the autocratic Milosevic regime.

Three previous attempts to elect a president since 2002 failed because too few voters showed up at the polls. This vote was certain to produce a president regardless of the turnout, after Parliament earlier this year scrapped a 50 percent turnout requirement.

"We must join the EU"

Tadic, who is considered popular with artists and business leaders alike, has received support from Prime Minister Vojislav Kostunica, ethnic minorities and dozens of local celebrities.

The Sarajevo-born psychologist and Belgrade college professor had made closer ties with the west a central plank of his campaign. "We must become a member of the European Union. We must continue with these reforms, so we can join the bloc. That would improve our lives. Without the EU, we cannot overcome our problems," Tadic said.

Tadic took over the leadership of the Democratic party after the March 2003 assassination of Zoran Djindjic, the Democrats' leader and Serbia's first noncommunist prime minister since World War II.

He has vowed to continue with the reform agenda of his predecessor. Tadic is also an ardent supporter of extraditing Serb war crimes suspects to the U.N. war crimes tribunal in The Hague, where Milosevic and others are standing trial on charges related to their roles in the Balkan wars in the 1990s.

"The West hasn't improved our life" 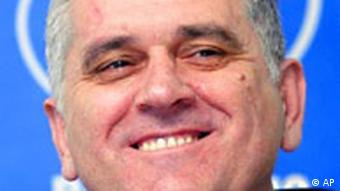 Tadic's challenger, 52-year-old Nikolic (photo) is against Serbia's entry to the EU and it was feared that any victory for him could leave Serbia isolated on the international stage and scare off investors from the west.

After casting his ballot in Belgrade earlier in the day, Nikolic predicted a tight race but said his "victory would return pride and dignity to Serbia."

Championing himself as the candidate for the working class, Nikolic's strident rhetoric and calls to limit foreign trade appeal to the unemployed, which make up almost 30 percent of the country's 7.5 million inhabitants.

"Serbia has opened its doors to the West, but the West hasn't improved your lives. It hasn't made the factories churn out more or brought better harvests," Nikolic said.

Nikolic has also strongly opposed Western demands that Belgrade extradite Serbs to The Hague, and had said that if he won the presidency, he would dedicate his victory to Milosevic.

Five years ago, NATO began air raids on Yugoslavia to stop violence in Kosovo. It was an important and controversial event for German foreign policy: For the first time since 1945, German soldiers participated in combat. (March 24, 2004)

Five years after the war, Kosovo remains troubled by ethnic tensions. While Albanians would like to become independent, Serbs want more participation from Belgrade to protect their rights. (March 24, 2004)