As more votes are counted in Moldova's elections, three pro-Europe parties appear on course to form a coalition. The pro-Moscow party had been ahead. 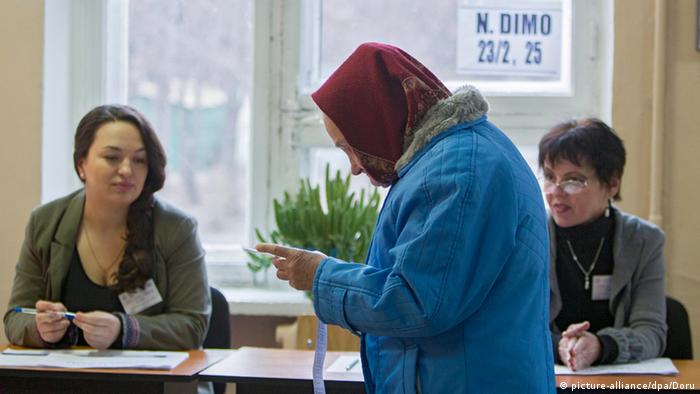 While early results indicated a lead for pro-Russia parties, as more votes were counted, pro-Europe parties went ahead with about 44.4 percent to 39.5 percent for the two pro-Russia parties after 85 percent of votes had been counted on Monday morning.

The three pro-Europe parties - the Liberal Democrats, the Liberals and the Democrats - would therefore have enough for them to win more than the 51 seats required for a majority in the 101-seat parliament.

Turnout for Sunday's poll was 55.86 percent of the total electorate. Residents of the Russian-backed breakaway region of Trans-Dniester did not take part in the election.

Events in neighboring Ukraine have had significant influence over Moldova.

The strongly pro-Russia Socialist Party had been in first place with 21.6 percent, according to partial results. The former Soviet republic with a population of four million has been divided between those who wanted to re-elect the pro-European coalition, or move to closer ties with Moscow.

Prime Minister Iurie Leanca said he voted for a "European Moldova - for a Moldova with justice." He added: "Everything ... indicates that Moldova cannot exist without Europe."

Russia had placed an embargo on Moldovan fruit after the country signed a trade association agreement with the European Union in June.

At least 600,000 Moldovans work abroad, half of them in the EU and the rest in Russia. The money they send home makes up about 20 percent of the country's gross domestic product (GDP).