Pro- and anti-Maduro groups rally in Venezuela, US voices concern

Protesters opposed to Venezuelan President Nicolas Maduro have clashed with police as government supporters also took to the streets. US Secretary of State John Kerry has condemned recent violence and detentions. 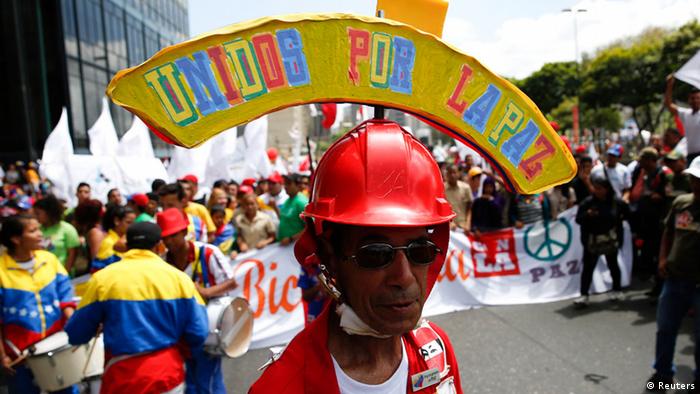 Police on Saturday fired water cannon and tear gas as protesters against the government of President Nicolas Maduro attempted to block a major highway in the capital, Caracas.

Students and opposition activists had gathered peacefully in the city's Altimira Square, before a contingent set off to halt traffic, as they had done the previous day. In a repeat of violence on Friday, police responded with teargas while the demonstrators threw missiles.

Meanwhile, thousands of government supporters rallied in a show of political support for the president, prompting fears of a repeat of deadly violence on Wednesday night, in which three people were shot dead during an opposition march.

US Secretary of State John Kerry on Saturday said he was alarmed at "senseless violence" and reports that scores of activists had been arrested.

Protesters have demanded the release of about 100 students and opposition activists detained in almost two weeks of demonstrations. In his statement, Kerry also voiced concern about an arrest warrant issued against opposition leader Leopoldo Lopez.

"We are particularly alarmed by reports that the Venezuelan government has arrested or detained scores of anti-government protesters and issued an arrest warrant for opposition leader Leopoldo Lopez," said Kerry. "These actions have a chilling effect on citizens' rights to express their grievances peacefully."

'Turn yourself in, coward'

Maduro appeared before supporters on Saturday, mocking the demands of protesters who want him to stand down. The opposition says Maduro - who was elected president after the death of fellow socialist Hugo Chavez last year - is to blame for spiralling crime and inflation as well as shortages of basic items for many residents of the oil-rich nation.

"I'm not going to give up one millimeter of the power the Venezuelan people have given me ... nothing will stop me from building this revolution which commandant Chavez left us!" Maduro insisted.

The president justified the arrest warrant issued by a court against Lopez, claiming he was a US-backed "fascist." "Turn yourself in, coward," said Maduro in an índignant appeal to his rival.

Protesters against the government have voiced dissatisfaction with law and order in the country, which has one of the highest murder rates in the world. There is also anger over inflation, which topped 56 percent last year, as well as electricity blackouts, and a shortage of basics such as toilet paper and milk.