Ukrainians have gathered in Kyiv to mark the anniversary of the start of protests that toppled the country's Kremlin-friendly president. Meanwhile, five pro-Western parties have agreed to form a coalition government. 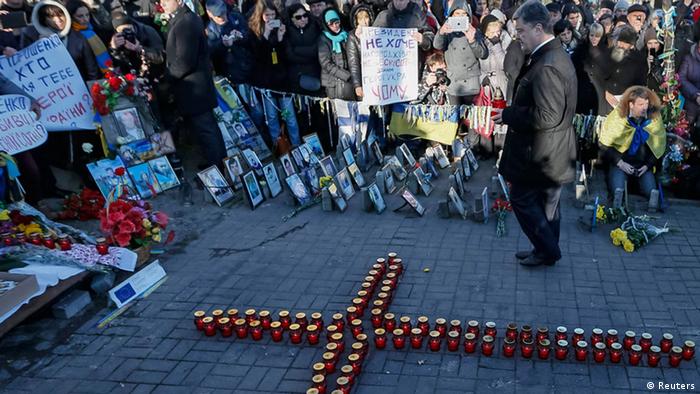 One year after the anti-government protests broke out, Ukrainian President Petro Poroshenko on Friday took part in a memorial ceremony to pay tribute to mark the anniversary and pay tribute to those who lost their lives in a crackdown by security forces.

Poroshenko laid a wreath and candles in a street just off the central square where most of those killed in the street battles with police back in February had perished.

He then faced dozens of relatives of those killed, who are angry over the president's failure to ensure that those responsible were brought to justice, as well as for not keeping a pledge to confer the title of national hero on the victims, a step that would make the families entitled to financial benefits.

Some of the relatives shouted slogans such as: "Who is a hero for you, Poroshenko?" or "Where are their killers?"

Biden warned that Russian failure to fulfil truce commitments made in September would result in "rising costs, greater isolation."

Friday marked the first anniversary since November 21, 2013 when former Ukrainian President Viktor Yanukovych declined to sign a previously agreed deal that would have strengthened economic and political ties with the European Union.

He choose instead to turn back toward Mosow. Anti-government protests, since dubbed "Euromaidan," ensued on Maidan Square, and in late February, Yanukovych fled to Russia. The pro-Western Poroshenko was elected president last May.

Meanwhile, five pro-Western parties have reached an agreement to form a new Ukrainian coalition government. They were to unveil details of their agreement at a press conference on Friday.

Loss of Crimea, conflict in the east

The anti-government protests and eventual toppling of Yanukovych led to a chain of events that included Russia annexing the Crimean peninsula. It also saw pro-Russia fighters launch a separatist war in the east of Ukraine, which is ongoing, despite a ceasefire signed by both sides at peace talks in Minsk back in September.

On Friday, there was a stern reminder that the conflict appeared to be far from over, as Ukraine's military accused Russia of firing into its territory from across the border.

"Over the past day, for the first time since the signing of the Minsk agreement, the shooting of Ukrainian territory restarted from the side of the Russian Federation," the AFP news agency quoted Ukrainian military spokesman Andriy Lysenko as saying.

With tensions high between Russia and the West over Ukraine, German Foreign Minister Frank-Walter Steinmeier was in Moscow for high-level talks. He is the first senior European minister to visit the Kremlin since July. (18.11.2014)

NATO calls on Russia to pull back forces from Ukraine

The head of NATO has urged Moscow to withdraw Russian troops from inside Ukraine and along their shared border. Germany's foreign minister, meanwhile was holding talks in both Ukraine and Russia. (18.11.2014)

Ukrainian leader Petro Poroshenko has decreed an end to the provision of all state services in rebel-held territories of eastern Ukraine. His order covers schools, hospitals, courts, prisons and benefits payments. (15.11.2014)

Estonia to get first female prime minister 3h ago