Following his historic visit to Kenya, the United States president has landed in Ethiopia. Barack Obama is expected to address the African Union and discuss regional conflicts. 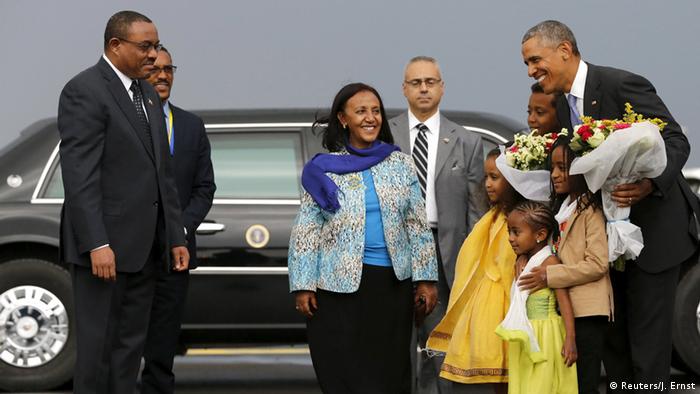 The presidential plane, Air Force One, touched down in Addis Ababa on Sunday, where Obama was greeted by Ethiopia's Prime Minister, Hailemariam Desalegn, and presented with flowers by brightly dressed children.

As the first US president to visit Ethiopia, his second stop on a four-day state visit to the region, he is expected to hold talks with the prime minister, meet civil society representatives and visit the African Union, which is based in the capital. The city was decorated with posters depicting Obama, while residents flew US flags and radio stations played an upbeat song with the lyrics "Barack Obama, welcome to Ethiopia."

Ethiopia has a poor record on human rights, which has led to criticism of Obama's visit. However, Ethiopia is a key strategic ally for the US, especially in security policy, counterterrorism and efforts to secure a peace deal in strife-torn South Sudan, which borders Ethiopia to the south-west. Obama is expected to meet with regional leaders on Monday in an attempt to make progress on ending the 19-month civil war in the young nation.

Earlier on Sunday, Obama gave a speech to Kenyans at a packed stadium in the country's capital Nairobi. He urged better treatment of women and girls in Kenya as well as increased efforts to fight corruption. He is also expected to raise issues related to democracy and human rights in Ethiopia.

Meanwhile, attacks over the weekend in neighboring Somalia, claimed by the militant group al-Shabab, have highlighted the security threats during Obama's visit to the region.

Ethiopia's Tigray conflict +++ Expert Ann Fitz-Gerald on the conflict +++ Named after British monarchs - People, places and institutions around Africa +++ How do university strikes affect students? +++ A Zambian is jailed every month for defamation of the president