In the wake of the London attack, there was an outpouring of concern on social media, especially via the #Prayfor hashtag used also after the Paris, Nice, Brussels and Berlin terrorist attacks. 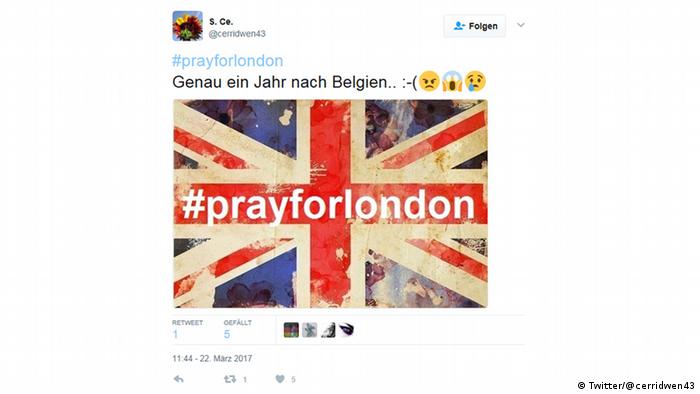 A European metropolis was again the target of an attack when on Wednesday afternoon a man drove a car into a group of passersby on London's Westminster Bridge, killing three people. He then crashed the vehicle outside Westminster parliament and after stabbed a policeman, who also died. It was an echo of last year's Nice and Berlin terror incidents.

The attack has claimed five victims, including the alleged perpetrator, who was shot by the police, while around 40 people were injured, some seriously.

As the world was alerted to these tragic events on Wednesday, the hashtag #PrayForLondon was quickly used on Twitter to focus the grief and concern felt by many. Among the tweets were numerous calls for solidarity and defiance.

After singer Adele dedicated a song, "Make You Feel My Love," to the victims of the attack in her hometown during a performance in Auckland, New Zealand, it was tweeted out via #PrayForLondon.

"All I want is to be home with my friends and family," said Adele. "They're okay but there's four people who aren't so let's dedicate this song to them."

Other prominent London-based entertainers like singer Lily Allen tweeted out her love for her home city, and in another tweet called on city residents to keep calm and let the investigation continue.

Allen also retweeted a call to avoid divisions in the wake of the attack via the #DefeatTerrorTogether hashtag.

But for all the defiance, as many social media many posts expressed frustration and despair at the ongoing frequency of the attacks.

As more news comes to light about the identity and motivation of the attacker, the social media soul-searching will continue.