In Tel Aviv, in Kuwait, on the pyramids of Giza — landmark structures all over the world have lit up with the Lebanese flag. The images have gone viral. 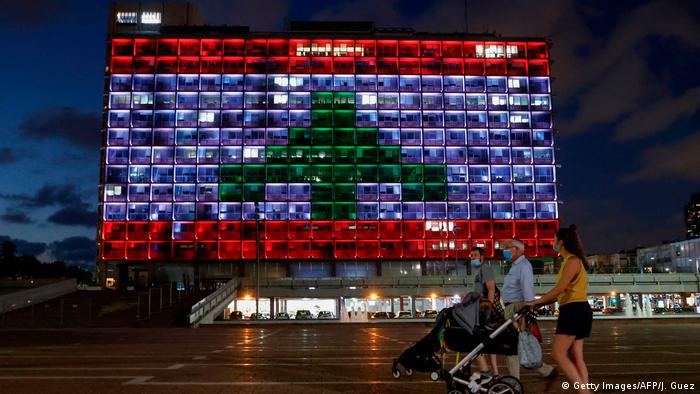 The day after the devastating explosions in the port area of the Lebanese capital, Tel Aviv city hall was illuminated in unusual colors. After sunset, the multi-story administrative building was lit in red and white, with a green cedar in the middle: the image on the Lebanese flag.

Beirut and Tel Aviv are only about 200 kilometers apart as the bird flies, but officially the neighboring countries are at war. "Humanity precedes any conflict," wrote Tel Aviv Mayor Ron Huldai on Twitter. "Our hearts go out to our Lebanese neighbors." Not all Israelis welcomed the gesture. Rafi Peretz, Israel's Minister of Jerusalem Affairs and Heritage, called the show of solidarity a "moral confusion."

With the rise in terrorist attacks since the beginning of the millennium, countries around the world have taken to illuminating important architectural monuments in the national colors of the affected country. After the explosion in Beirut, Middle East states above all displayed this form of solidarity.

The pyramids of Giza and the Lebanese flag have a geometric characteristic in common — the Lebanese cedar, an evergreen tree that grows in a pyramid shape. Found exclusively in Lebanon, Turkey, Syria and Crete, the tree can grow to be up to 1,000 years old. In Lebanon, the cedar is considered a national emblem, has been used in the region for centuries and is depicted on the national flag.

Cedar, a symbol of peace and prosperity

While historical monuments were illuminated in Lebanon's national colors in Egypt, in Dubai the world's highest tower, the Burj Khalifa skyscraper, became a symbol of solidarity.

The famous towers of Kuwait were also illuminated in the colors of the Lebanese national flag. In the French capital Paris, on the other hand, lights went out as a sign of compassion. On Wednesday night the lights in the Eiffel Tower were turned off at midnight, an hour earlier than usual. 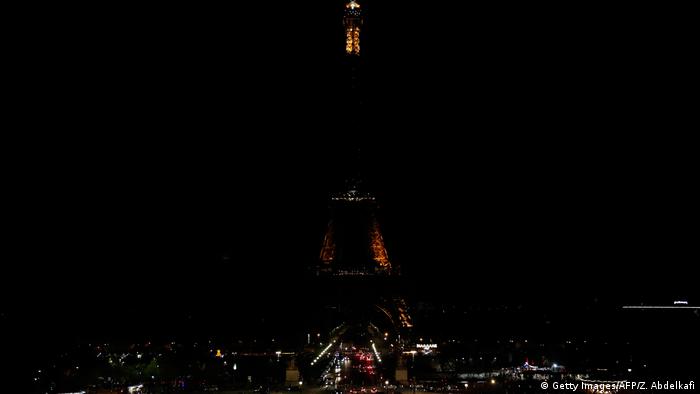 Lights out in solidarity with the victims of the Beirut explosion

French President Emmanuel Macron made a special gesture. He tweeted in Arabic and promised to always stand side by side with Lebanon. France and other European states pledged humanitarian aid.

The city of Belfast also showed solidarity by lighting its city hall in red, white and green. City Councillor Ross McMullan once lived in Beirut and fell in love with the city. "At a time when there is very little we can do from so far away, the very least we can do is show love and solidarity at a time of great darkness and tragedy," McMullan said. "Lighting City Hall is our way of saying that we stand with you and your loved ones affected by this awful incident with love and solidarity from Belfast to Beirut."

Under the hashtag "PrayForBeirut," condolences from thousands of users worldwide have been pouring in via social media news feeds. The following video also gives hope. In the middle of a destroyed apartment, an elderly lady plays the Scottish song "Auld Lang Syne" on an intact piano. She was filmed by her granddaughter.

Israa Seblani was posing for her wedding day photos when a deadly explosion blasted through the Lebanese capital. In an interview with DW, the doctor describes the moment, caught on film by her videographer.

Over 55,000 sign petition for France to take control of Lebanon

More than 55,000 people have signed a petition calling for France to take control of Lebanon following the deadly blast in Beirut. Critics say corruption and mismanagement by Lebanon's government was the cause.