Portugal′s Socialists to form minority government | Europe | News and current affairs from around the continent | DW | 16.10.2009

Portugal's ruling Socialists have failed to secure a coalition partner, but Prime Minister Jose Socrates says that all parties are willing to compromise to safeguard political stability in times of crisis. 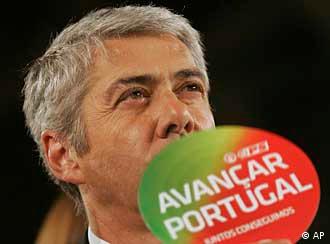 Socrates announced the formation of a minority government on Thursday after two days of talks with four opposition parties failed to produce a coalition.

"This government will last the four-year term, it is with this spirit that I start. Because the country has difficulties ahead and it needs political stability," Socrates said in a televised statement.

Socrates said that although none of the opposition parties were open to any lasting political agreement with his center-left Socialists they had demonstrated their willingness to cooperate in parliament for the sake of stability.

"I will do everything possible so that this dialogue yields positive results. I will now take the necessary steps to present to the president a government under the Socialist Party's responsibility," Socrates said.

Socrates is due to present a new government line-up within eight days.

Portugal is facing rising debt and unemployment and a growing budget deficit. The new government must present the 2010 budget bill to parliament by the end of 2009.

Socrates' Socialists won a second term in the September 27 general election, but lost their absolute majority in parliament, securing only 97 seats in the 230-seat assembly, down from the 121 seats won four years ago.

The center-right Social Democrats took 81 seats, the right-wing CDS-PP won 21 seats, the Left Bloc gained 16 and the Communist-Greens coalition got 15.

Portugal's prime minister Jose Socrates looks set to continue in office, but at the head of a minortiy government after his Socialists lost their absolute majority at last month's general election. (09.10.2009)

Portugal’s general election about to get started

The latest polls point to the governing Socialists remaining the largest party in parliament, but with the rise of the radical left denying them the outright majority they won four years ago. (26.09.2009)