Portugal is to head to the polls on January 30, after the country's president called a snap election. The announcement comes a week after parliament rejected the minority government's 2022 budget bill. 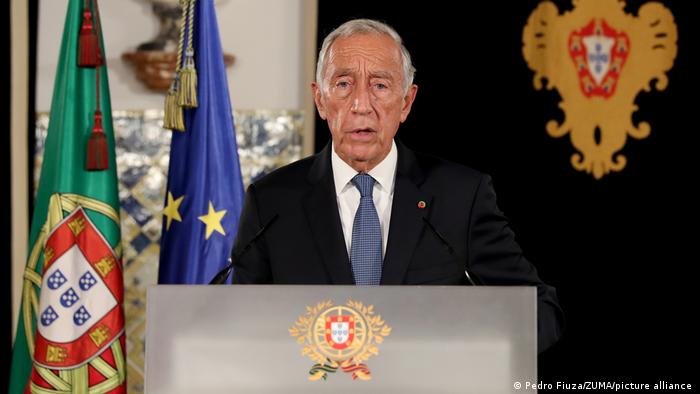 The president said this was the best way to move forward, with a decisive year ahead

'Give the word back to the people'

Rebelo de Sousa announced the date in a televised address, saying it was the best way to solve the budget impasse.

He said the rejection of the budget had "totally reduced the government's support base" and that 2022 would be "a decisive year for a durable exit from the pandemic and the social crisis which has hit us."

"In moments like this there is always a solution in democracy, without drama or fears ... to give the word back to the people," the conservative president said.

"It is the only way to allow the Portuguese ... to decide what they want for the coming years."

Ahead of his decision, Rebelo de Sousa held a series of consultations, including talks with trade union representatives and employer groups. He spoke to the heads of all parties represented in parliament on Saturday.

The president also met the country's Council of State on Wednesday. The body advises the president and includes former lawmakers from across the political spectrum.

Prime Minister Costa has already promised to campaign for a "reinforced, stable and lasting majority."

Meanwhile, the right-wing opposition is riven by internal divisions.

Polls suggest Costa's Socialist Party would easily emerge as the strongest faction at an election, but would again fall short of a parliamentary majority.

It was the first time a budget was rejected since Portugal's transition to democracy in 1974, ending six years of relative stability under Costa and his left-wing coalition partners.

Costa's hard-left former allies, the Left Bloc and the Communists, rejected the budget along with all right-wing parties.

The budget had included some income tax cuts and increased public investment to stimulate the post-pandemic recovery. It also planned to cut the deficit to 3.2% of gross domestic product (GDP) from 4.3% in 2021.

The left-wing parties wanted more anti-poverty and healthcare spending, as well as improved labor laws. They said the budget focused too much on reducing state borrowing.

Costa said he could not risk the country's international reputation after its public debt burden led to painful austerity measures from 2011 to 2014 under an international bailout.