Pope′s Visit Overshadowed by Confrontation With Islam | Europe| News and current affairs from around the continent | DW | 27.11.2006

Pope Benedict XVI's visit to Turkey to heal a rift with the eastern Orthodox Church, has been overshadowed by Muslim anger over remarks about Islam. Muslim Turks seek dialogue, but will be monitoring his every word. 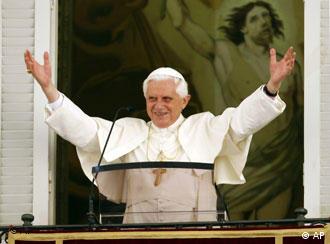 The highlight of Benedict's trip to Turkey is to share in a joint liturgical mass with ecumenical Patriarch Bartholomew, the spiritual head of the eastern Orthodox churches, which split from Rome in 1054. However, the four-day visit has now been overshadowed by the clash between Islam and Christianity.

It used to be rampant secularism in the West, not Christianity that was the scourge of radical Muslims, until Pope Benedict XVI quoted a 14th century Byzantine emperor, who'd characterized Islam as "evil and inhuman."

The German pope has since expressed deep regret at the pain his remarks had caused in September on an official visit to Bavaria, where he gave a speech at the University of Regensburg.

How that one particular quote got past the Vatican censors has been subject to much press speculation, but experts say that Benedict actually wanted to seek common ground with Muslims, while making a salient point or two about the use of violence in the name of religion. 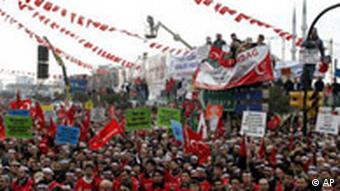 Ironically, an important message of the speech on one of the pope's favorite topics, the link between faith and reason, had criticized the "modern, Western world that excludes God from its life," a view that is also shared by devout Muslims.

"The pope was lecturing as a university professor, where he once taught, not as a political figure," said Eberhard von Gemmingen, a Jesuit priest who is head of the German section of Radio Vatican. "I assume that is why he spoke so freely, and did not anticipate the public reaction to his speech. This is a pope who wants to have challenging, provocative discussions.

"He also wanted to get across the point that Christians, who are a tiny minority in a predominantly Muslim country such as Turkey, do not enjoy the same religious freedoms that Muslims do in the West," von Gemmingen added. "Turkey is a secular country, in theory. But in practice, religious minorities are totally discriminated against, and if Turkey hopes to join the EU, it must recognize certain basic human rights for all, regardless of faith."

Archbishop Michael Fitzgerald, an Islamic expert who is the Vatican's nuncio to Cairo, meanwhile said that the papal visit would be closely scrutinized.

"The main purpose of the trip is to meet the patriarch, but the goal of the Catholic Church has been always to reach out to Muslims too," said Fitzgerald, who was formerly head of the Vatican's office for inter-religious dialogue. "What makes the visit different this time is that everyone will scrutinize what the pope says more closely, so that the outcome of his visit will take on an added significance. Many Muslims have accepted the Pope's apology, others have very politely said he was mistaken, but would like to continue a dialogue." 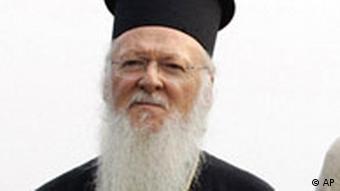 The Web site Catholic Online cited sources saying that transferring Archbishop Fitzgerald from the Vatican to Egypt last February could signal a tougher stance in the relations with Islam, and a greater insistence on evangelism.

The fact that the pope did not nominate an immediate successor to the post could signal a change in the actual status of the Pontifical Council for Inter-religious Dialogue. This concerns Turkish Muslims, such as Cemal Usak, who heads a foundation in Istanbul on inter-faith dialogue.

"I have read the speech in translation, and was not pleased with it," Usak said. "As pope, he should not speak in that way. He said he was sorry, but the apology was not sufficient. Ninety-nine percent of Muslims are moderate. Our prophet never justified the use of violence against humanity."

Usak added that Benedict also failed to live up to his predecessor, John Paul II, in this respect. The latter had built bridges to the Islamic world with symbolic gestures by citing the Koran and visiting mosques.

"Everything now depends on what Benedict says publicly in speeches with the (Turkish) president, the patriarch," Usak said. "He can compensate for the wounded hearts of Muslims. I am optimistic."

On Tuesday, the pope will be meeting with Ali Bardakoglu, the president of Religious Affairs and Turkey's highest Muslim authority, who has condemned the pope's Regensburg speech. 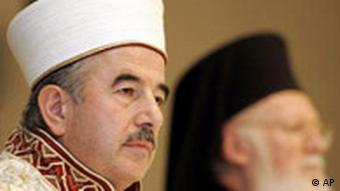 A visit to Istanbul's Blue Mosque, which is regarded as a highly symbolic move of reconciliation, is not on the official schedule however. While a meeting with Turkish Prime Minister Recep Tayyip Erdogan, who is headed out to the NATO summit in Riga on the day of the pope's arrival, was originally not planned, Erdogan now wants to meet Benedict for 15 minutes at the airport in Ankara.

The Vatican is not against Turkey joining the EU either, even though Benedict, as cardinal, was opposed to its bid to join.

"If Turkey fulfills its obligations and meets EU criteria, why shouldn't it become a full member?" asked Vatican spokesman Federico Lombardi. "The issue of Turkish membership in the EU is a political one. We must note that the Vatican is not an EU member."

Whether the pope likes it or not, his trip to Turkey, which starts Tuesday, has turned into a confrontation between Islam and Christianity, DW-TV's religious correspondent John Berwick writes. (27.11.2006)

The main goal of Pope Benedict XVI's Istanbul trip is to mend fences with the Orthodox Christian Church as well as Muslims, who were offended by remarks the pontiff made about Islam during a visit to Bavaria. (26.11.2006)

Erdogan Chooses NATO Over Pope in Apparent Snub to Pontiff

Already facing a potential storm of protests when he visits Turkey later this month, Pope Benedict will not be recieved by the Turkish prime minister in what the Italian press were calling a major snub to the pontiff. (02.11.2006)