Pope Benedict XVI warned on Sunday that the modern world was becoming "deaf" to God's message, as he gave the first open-air mass of his visit to his native region of Bavaria in Germany. 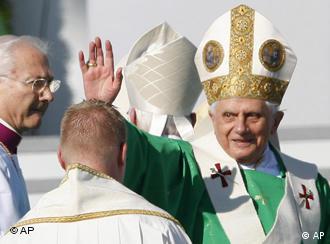 A day after arriving in Bavaria, the pope led a mass for up to 250,000 people in Munich, the first of three he will take during his six-day pilgrimage to his southern German homeland. The pontiff was driven to the mass in his "papamobile" under clear blue skies. 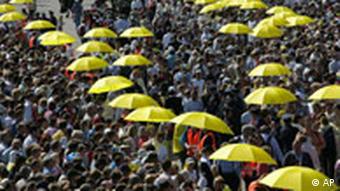 He told the predominantly German crowd in a field next to Munich's convention centre that there was a danger of a "hardness of hearing where God is concerned."

"This is something from which we particularly suffer in our own time," the pope said. "Put simply, we are no longer able to hear God -- there are too many different frequencies filling our ears," he said.

"Along with this hardness of hearing or outright deafness where God is concerned, we naturally lose our ability to speak with him and to him."

The 79-year-old pontiff has said the visit to Bavaria is a trip down memory lane but it has the more serious purpose of attempting to arrest the decline of religious observance in Germany.

Christian belief in Germany is about equally split between Catholics and Protestants but has seen a dramatic drop in religious observance in recent decades. More than 100,000 people are said to leave the German Catholic church every year.

In his sermon, the pope also criticized the German Catholic church for its reluctance to evangelize, saying that while it was always ready to help dioceses in Africa or eastern Europe to rebuild their churches or embark on social projects, it seemed reluctant to seek converts to the Catholic faith.

He said bishops in those regions of the world had learned from experience that "evangelization should be foremost, the God of Jesus Christ must be known, believed in and loved, and hearts must be converted if progress is to be made on social issues and reconciliation is to begin and if, for example, AIDS is to be combated by realistically facing its deeper causes". 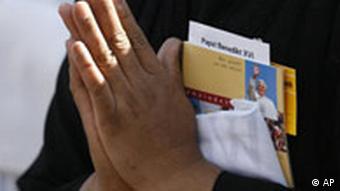 A praying nun folds her hands during the papal mass

His message went down well with the Bavarian faithful.

Renate Boml, 45, had risen at dawn to catch a train from her village to attend the mass.

"The pope has pleasantly surprised me with his personal warmth and his intelligence," she said. "We are happy to be here for this celebration of our beliefs."

Pope urges Germany to do more for Muslim integration

A day earlier, the pope said on his arrival in Munich that there was "fatigue everywhere" but added: "German Catholicism is not as tired as some people think."

German President Horst Köhler, a Protestant, urged the Pope on Friday to do more to foster ecumenical cooperation.

"Even if we can't sweep aside 500 years with clever discussions, we will try with our hearts and our heads to come closer," the Pope replied, referring to the Reformation in the 16th century that split Western Christianity. 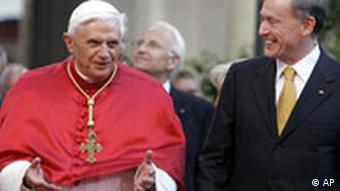 "He made clear that we should try to make a greater effort to integrate Muslim citizens," Köhler said. "He said Germany could give a signal to the Muslim world that we want to live happily together, that they are welcome."

Later on Sunday, the pope is expected to celebrate vespers in Munich Cathedral, a familiar location for the former Cardinal Joseph Ratzinger who was archbishop of the city from 1977 to 1982.

The other masses will take place in the town of Alltöting on Monday and in the city of Regensburg on Tuesday.

This visit bears the personal stamp of the pope, who said on his arrival that his heart "beats with a Bavarian rhythm." 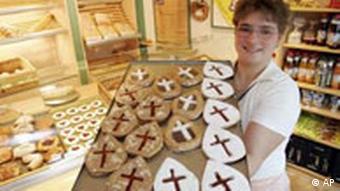 On Monday, he will visit the house in the small town of

Marktl am Inn near the Austrian border where he was born on April 16, 1927.

The pope will spend Wednesday with his brother, Monsignor Georg Ratzinger, in Regensburg and together they will visit the graves of their mother, father and sister.

This is Benedict's fourth foreign trip since becoming pope in April last year and the second to Germany in that time. He is due to visit Turkey in November and Brazil next year.

attempted bombings of two passenger trains in two western cities in July. Around 5,000 police are on duty.

Pope Benedict XVI is to arrive in Bavaria on Saturday to start a six-day homecoming pilgrimage to the southern region of Germany where he was born. (Sept. 9, 2006)