Pope mistakenly quotes Putin instead of Merkel on Afghanistan

Pope Francis cited Angela Merkel's greatness before echoing her feelings about the situation in Afghanistan. However, it was Vladimir Putin, not the German chancellor, that the pope was parroting. 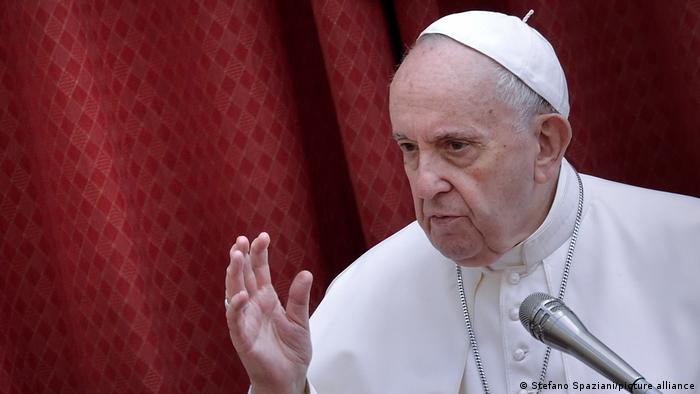 Pope Francis lauded Angela Merkel's wisdom on the Afghan conflict, before attributing to her a quote from Vladimir Putin

Pope Francis thought he was quoting German Chancellor Angela Merkel, whom he called "one of the world's greatest political figures," when he criticized the West's involvement in Afghanistan on Wednesday.

Instead, he was quoting Russian President Vladimir Putin when he told a radio interviewer: "It is necessary to put an end to the irresponsible policy of intervening from outside and building democracy in other countries, ignoring the traditions of the peoples."

Putin had said these words in a biting critique of the US policy towards Afghanistan during a press conference with Merkel on August 20. In the same press conference, Merkel admitted that the two-decade operation had been unsuccessful in creating a definitive new future for the country, but defended the war as having made a difference.

The pope had been expressing his belief that while the withdrawal of western forces was necessary, the mode it which it had been carried out had created an avoidable humanitarian crisis.

"As far as I can see, not all eventualities were taken into account here ... or so it seems, I don't want to judge. I don't know whether there will be a review or not, but certainly there was a lot of deception perhaps on the part of the new authorities [the Taliban]. I say deceit or a lot of naiveté, I don't understand," Francis said.

Merkel's spokesman Steffen Seibert declined to comment on the pope's mistake specifically on Wednesday, only telling reporters in Berlin that the chancellor's real stance concerning the conflict was well known.

In a recent speech to parliament, Merkel echoed similar statements made by US President Joe Biden by arguing that one of the goals of the war had been to prevent terrorists from using Afghanistan as a base from which to plan attacks on the same scale as September 11 – a goal that had been met. She added that the mission in Afghanistan had also protected the rights of women, allowed girls to go to school, brought drinking water and electricity to rural areas, and drastically reduced child mortality.

Pope Francis has not yet acknowledged the faux pas, but the Spanish radio station that the pontiff spoke to said he had vetted the entire interview himself before it aired.

Angela Merkel: Our focus is on the local armed forces