Pope met with Kentucky anti-gay marriage clerk during US visit

The pontiff secretly met with Kentucky clerk Kim Davis when he was in Washington last week. Davis was in jail for refusing to issue marriage licenses to gay couples despite a US Supreme Court ruling. 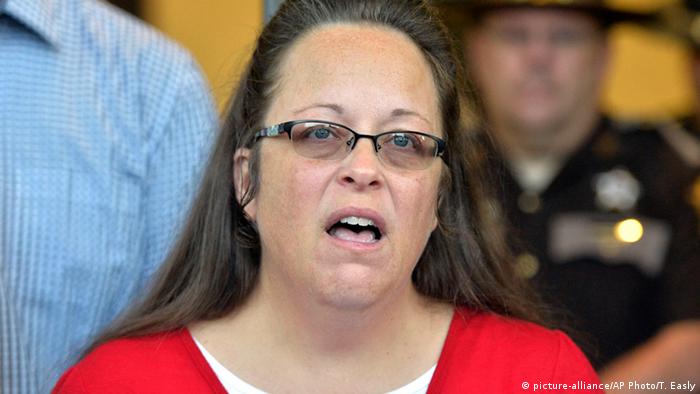 Pope Francis is reported to have met Kim Davis during his US trip last week, US media said on Wednesday.

"I do not deny that the meeting took place, but I have no comment to add," Vatican spokesman Federico Lombardi told journalists in a statement.

But Davis, the Rowan County clerk who was in prison for refusing to sign marriage licenses for same-sex couples, and her husband traveled to Washington and met the pontiff at the Vatican embassy, US television broadcasters ABC News and CBS News reported.

"It was really very humbling to even think that he would want to, you know, meet me or know me," Davis told ABC. "I put my hand out and he grabbed it, and I hugged him, and he hugged me and he said, 'Thank you for your courage.'"

Davis said the Pope told her to "stay strong" before he left and that it was "a great encouragement." Knowing that the pope agreed with what she was doing "kind of validates everything," she said.

Earlier, while speaking to reporters before leaving for the Vatican after his US-Cuba trip, the pontiff said government officials had a right to refuse to carry out their duties. "It is a right. And if a person does not allow others to be a conscientious objector, he denies a right," he told reporters.

The Kentucky government official was sent to jail in September for refusing to comply with a judge's order to issue marriage licenses, despite a Supreme Court ruling on same-sex weddings.

At the time, Davis said her beliefs as an Apostolic Christian prevented her from signing gay couples' marriage licenses and that such an act was against her conscience.

However, the American Civil Liberties Union (ACLU), which went to court against Davis' reluctance, said she had a responsibility as a public official to issue the licenses.

Kim Davis, gay marriage, and the death of Christian privilege in America

Arrested for denying marriage licenses to gay couples, Kim Davis is now being championed by the Republican candidates as a hero. Her imprisonment signals the end of Christian privilege in the US. Spencer Kimball reports. (05.09.2015)