During the Algerian prime minister's visit in Berlin, Merkel urged his country to take back rejected asylum seekers. But although the two states have a repatriation agreement, it's not always easy to put into practice. 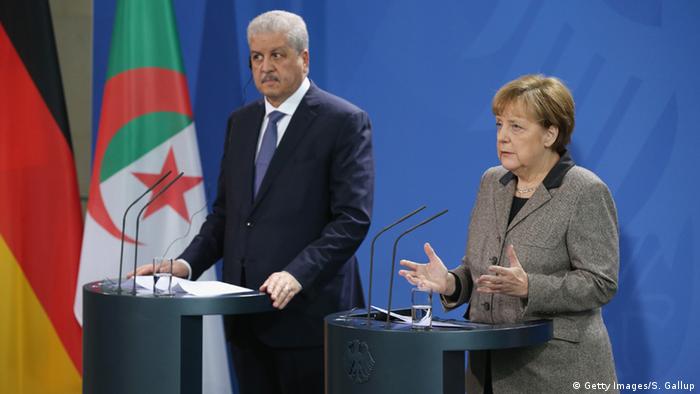 For some weeks now there's been a new group of refugees in Germany – they're from Morocco and Algeria. At the start of the year, Greek authorities highlighted the fact that people from these countries were trying to reach central Europe via Turkey. According to the Federal Ministry of the Interior's most recent asylum statistics from December 2015, Morocco is already one of the top five countries of origin.

The CSU, the Bavarian sister party of Angela Merkel's governing, center-right CDU, responded to this at its traditional retreat in Wildbad-Kreuth in January, calling for Algeria and Morocco to be declared "safe countries of origin." The CSU also discussed the issue with Chancellor Merkel, who attended the retreat as a guest. The new migration route was also subsequently addressed at the meeting of the CDU Federal Executive in Mainz.

No repatriation agreement with Algeria

If their countries were to be categorized as safe countries of origin, people from Algeria and Morocco would effectively have no asylum seeker or protection status in Germany. The recognition rate would be very low, the Chancellor said after a meeting with the Algerian prime minister Abdelmalek Sellal in Berlin. This indirectly confirmed that these countries are considered to be safe countries of origin. Whether and when there will be a regulation to this effect was something Merkel left open, but she did say that it had become apparent that larger numbers of Algerians were coming to Germany illegally.

The subject has acquired particular volatility as a result of the investigation into the attacks outside of Cologne's central train station. The police say that up to nine of the suspected perpetrators were Algerians. The Algerian prime minister declined to comment on this directly, saying that not all the information was available yet. He did, however, state that all Algerians who had traveled to Germany illegally would be sent back to Algeria. This was in accordance with the Algeria's 1997 repatriation agreement with Germany. However, he said, it must always be clearly proven that they really were Algerian. That could prolong the matter.

In practice, clearly identifying refugees is a difficult thing to do. As the CSU discussed in Wildbad-Kreuth, anything between 50 and 70 percent of the refugees arriving in Bavaria have no documentation. Town mayors have reported portable toilets stuffed full of identification papers. Many people, they say, throw their papers away and pretend to be Syrian, gambling that this will give them a better chance of obtaining asylum or protection in Germany. According to the CSU, the authorities estimate that a third of the Syrians in Germany are not Syrians at all. Many Algerians could also be among them.

The CSU has suggested that refugees without identification papers should no longer be let into the country. Furthermore, it says, those whose prospects of remaining are slim could be held in special facilities near the border, so that they can be deported again from there. That would mean they would not, as is usual, be allocated to somewhere else in the country, which often means they are less likely to be deported. But these suggestions are still controversial within the governing coalition.

It was the Algerian premier's first visit to Germany. Before meeting Chancellor Merkel, Sellal met the German parliamentary president, Norbert Lammert, and agreed to a cooperation between the two parliaments. Sellal also gave a speech before representatives of German business. Algeria, he said, was more or less built by German companies in the 1970s, and it needed German know-how in the future, too. Sellal pointed out that 300 companies were already involved in cooperations, and thanked the Chancellor for this support. 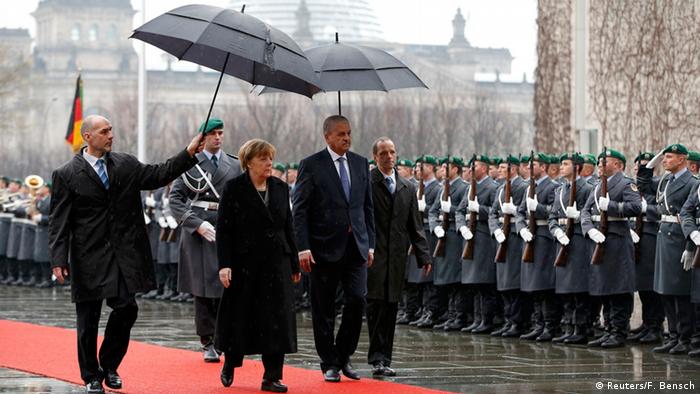 The Chancellor and Sellal spoke at length regarding the constitution project in Algeria. The human rights that had been secured and the increase in democracy were a great gain, said the premier. Merkel praised the Algerian constitutional reform, saying that there was now greater transparency and more rights in the Algerian parliament.

In her statement, Merkel emphasized Algeria's role as an "anchor of stability in the region." Algeria, she said, had played an active role in creating a government of unity in Libya. This must be installed quickly, she said, as the rapid spread of the IS terrorist group in Libya was an alarming development. Merkel added that there was also close communication with Algeria on the question of Mali, where German soldiers are also in the region as part a mission. The two countries therefore had common concerns, said Merkel, especially in the fight against terror.

Syrian refugees in Germany take a stand against sexual attacks

Syrian refugees in Germany are using Social Media to come together to condemn the attacks in Cologne on New Year's Eve, using the #SyrerGegenSexismus (Syrians against sexual assault) hashtag to protest. (12.01.2016)

Former German justice minister: 'Loss of trust in the state of law'

What needs to change after the Cologne attacks? Former Justice Minister Sabine Leutheusser-Schnarrenberger tells DW that a transparent investigation of events is necessary to re-establish trust in the state of law. (11.01.2016)