The secretary of state has outlined a hard-line Iran strategy that is likely to deepen the chasm between the EU and US. Analysts and former US officials say the plan is incoherent and dangerous. 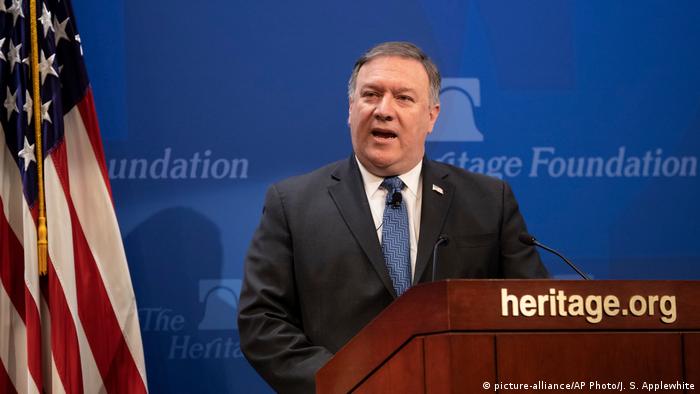 In a speech touted to outline the administration's strategy toward Iran, Secretary of State Mike Pompeo promised "the strongest sanctions in history" should Tehran not buckle to US demands.

Pompeo's speech comes nearly two weeks after President Donald Trump pulled out of the Iran nuclear deal and reimposed sanctions lifted under the Joint Comprehensive Plan of Action (JCPOA), the 2015 accord that Iran signed with Russia, China, the United States, Britain, France and Germany.

"The sting of sanctions will only grow more painful if the regime does not change course from the unacceptable and unproductive path it has chosen for itself and the people of Iran," Pompeo said at the conservative Heritage Foundation think tank in Washington, DC.

Pompeo said the United States would not try to renegotiate the JCPOA. Instead, any new deal would require Iran to meet 12 demands, including halting its ballistic missile program and ending interventions in Syria and Yemen, as well as wide-ranging concessions on its civilian nuclear program. Pompeo added that the United States and its partners in the Middle East would "crush" Iranian operatives and regional allies such as the Lebanese Shiite group Hezbollah.

"All world countries want independence in their decisions, and the Americans may advance their agenda in some places through pressure, but logic does not accept them making decisions for the world," Rouhani was quoted by state broadcaster Press TV as saying. "Who are you to decide for Iran and the world?"

Iran's top diplomat, Javad Zarif, described Pompeo's plan as "regression to old habits." In a Twitter post, he chided the Trump administration for being "imprisoned by delusions, failed policies and dictated to by corrupt special interest."

Analysts and former US officials said the Trump administration revealed that it had little desire for a diplomatic solution, but looked rather to be pursuing a policy of economic pressure designed to topple the Iranian regime.

"This isn't a strategy. It is an unprioritized and internally incoherent wish list," said Jarrett Blanc, who was coordinator for implementation of the agreement at the State Department under the Obama administration. "It is a fantasy of regime change without the resources or leverage. It is, obviously, also an insult to our European allies."

Washington's hard-line policy of economic warfare is likely to further strain relations with allies already angry at Trump for withdrawing from the nuclear deal despite their lobbying and Iran's compliance.

EU leaders are now scrambling to ensure that Iran receives the economic benefits it was promised in order to keep Tehran in the deal. Among other things, they are considering implementing a blocking statute that would protect EU firms that do business with Iran and another measure to have EU governments make direct money transfers to Iran's central bank.

Pompeo made it clear that the United States expects the support of regional and global allies, including the European Union. Though he said he believed that the EU would follow the United States because they shared "values," he also doubled down on threats to target European entities doing business with Iran.

However, EU foreign policy chief Federica Mogherini accused Pompeo of failing to show how pulling out of the nuclear accord would make the region safer or "how it puts us in a better position to influence Iran's conduct in areas outside the scope of the JCPOA."

Mogherini went on to stress that the EU would remain committed to the deal as long as Iran abided by its nuclear-related commitments, "as it is doing so far."

Ali Vaez, the director of the Iran Project at the International Crisis Group, said the Trump administration had made it clear that EU leaders had wasted their time trying to convince the president to remain a party to the deal, and that there was now a "fissure in the middle of the Atlantic."

"Its message to Europe is now clear: 'Join me in changing not Iran's behavior, but its regime,'" Vaez said. "Pompeo's speech further proved that there is no middle ground to be explored with the Trump administration. Europe should take its fate in its own hands."

The US strategy appears to be to apply economic pressure that will create domestic political instability in Iran that will challenge the regime directly. However, unilateral US sanctions are unlikely to be as effective as the international measures that had brought Iran to the table to negotiate the JCPOA.

Those international sanctions were punishing, but they were only effective because of their international scope. For China, Russia and the European Union, going back to those sanctions is a nonstarter so long as Iran complies with the nuclear accord.

"The idea of reapplying sanctions, which will hammer the Iranian people under the guise of helping them, is not only deeply incoherent, it also directly undermines the chosen policy approach of America's European allies," said Esfandyar Batmanghelidj, the founder of the Europe-Iran Forum, a business network.

"Europe is continuing to bet on dialogue and engagement, including economic engagement, and is getting results, so far keeping the Iranians in the agreement after Trump violated and abrogated the deal," he said. "The trans-Atlantic rift is only getting deeper."

Meanwhile, analysts said the US's violation of the JCPOA had only reinforced perceptions in Iran that the United States cannot be trusted. The Trump administration's calls for Iranians to rise up against the country's leaders and veiled threats of regime change will also harden the Iranian leadership's resolve.

"Even if the US could inflict maximum pressure on Tehran, such onerous measures are unlikely to persuade an Iranian leadership seemingly convinced that the only thing more dangerous than this threat would be to surrender to it," Vaez said. "The Trump administration might believe that it has devised a new Iran strategy, but, in the eyes of the Iranian leadership, this is par for the course."

Mike Pompeo is set to lead the State Department as the US navigates a series of stormy foreign policy issues. Will the CIA director and hawkish former Republican congressman be the hard-line diplomat Donald Trump seeks? (13.03.2018)

US top diplomat Pompeo issues list of demands to Iran

Secretary of State Pompeo has said that before a new nuclear pact is reached, Tehran must stop all military activities in the Middle East. He has promised major concessions in return. (21.05.2018)

Tehran has said Europe's attempts to save the 2015 nuclear deal are insufficient. Iran sees a particular problem with European companies halting investment in the country. (21.05.2018)