Poll: Europeans and Americans Prefer Hillary Clinton as President | Europe| News and current affairs from around the continent | DW | 06.12.2007

Europeans and Americans agreed that Hillary Clinton would make the best US president of those running for the position in a poll published on Friday, Dec. 7. 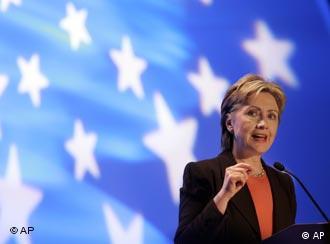 There's still along way to go until Americans vote for president

Enthusiasm for Clinton was significantly higher among Europeans than Americans the survey that was carried out by the Harris Institute for France 24 television and the Paris-based International Herald Tribune found. 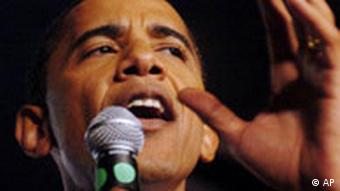 Obama trailed Clinton in this poll, too

Democratic Party rival Barack Obama and Republican Rudy Giuliani finished second among Americans, both with 12 percent. Obama was the runner-up in France and Germany, while Giuliani was the second choice in Britain, Italy and Spain.

Over half of the European respondents agreed that electing a woman as US president would have a positive effect on the United States, with numbers ranging from 53 to 56 percent in Spain, Italy, France and Germany. Only 29 percent of Americans, however, thought it would be positive, while 26 percent said the effect would be negative. 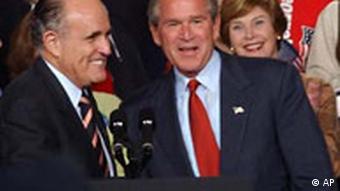 Giuliani faired far-better than party colleague Bush in the poll

Asked whether the election of a black man would have a positive effect, 43 percent of Britons and Germans and 50 percent of Spaniards said yes. Only 33 percent of Americans agreed.

The poll also showed how unpopular President George W. Bush is among both Europeans and Americans. They were overwhelmingly opposed to him running for president again, with 72 percent of Britons, 87 percent of the French and the Germans, and two-thirds of Americans rejecting the idea.

The survey was carried out between Nov. 1 and 14, 2007. Over a thousand adults were polled in Britain, France, Germany, Italy, Spain and the United States each, a total of 6,590.

Opinion: Europe and the US Need Each Other

George Bush received Nicolas Sarkozy in the White House and Angela Merkel at his Texas ranch last week. The meetings took different tones, but both show the gap is closing over the Atlantic, said DW's Christina Bergmann. (12.11.2007)

Expert: Roots of Europe's Resentment of US Go Back Centuries

Europeans have developed a high level of anti-Americanism. Andrei Markovits, an American expert on Germany, says politics is just one of the many spheres where Europeans oppose the big and powerful United States. (11.08.2007)