Polish President Lech Kaczynski said he will not ratify the European Union's reform treaty. Ireland's rejection of the Lisbon Treaty last month makes the ratification process a waste of time, he said. 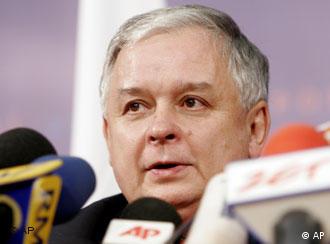 Europe's unity over the reform treaty continued to unravel this week after Poland's president seemed set to abandon his country's approval of the EU's reform treaty.

"At the moment the question of the treaty is pointless," Kazynski told the Polish newspaper Dziennik.

Poland's parliament approved the treaty in April, but Kazynski's signature is needed to finalize the ratification.

The treaty faced its first stumbling bloc when it was rejected by Irish voters in a referendum last month. The treaty needs to be reatified by all 27 member states before becoming law.

Kaczynski said he was unworried about the future of the EU. Even after a similar EU Constitutional Treaty was rejected by French and Dutch voters in 2005, the union continued to function, Kazynski told Dziennik.

"The EU worked, is working and will continue to work," Kaczynski said in the interview published Tuesday, July 1.

The Lisbon Treaty is meant to streamline the bloc's institutions and give it a stronger voice in international affairs.

Treaty advocates worry that Kaczynski's refusal to sign the treaty could encourage the euroskeptical Czech government to do the same later this year. It could also put a freeze on the EU's plans to accept new members, such as Croatia.

Although Kacznski indicated he had no intention of signing the treaty, he left some wiggle room adding that it is "difficult to say how this whole thing will end."

Ireland’s rejection of the EU reform treaty has presented France with a weighty challenge at the start of its six-month presidency. DW-WORLD.DE asked EU experts about the options for the months ahead. (01.07.2008)

Ireland has dashed EU hopes of a quick solution to the bloc's latest institutional crisis by saying it was unlikely to come up with a solution at the next summit in October. (20.06.2008)

Ukraine's intelligence chief has accused Russia of intending to split the country, similar to North and South Korea. Meanwhile, face-to-face talks are set to restart on Monday.

No one knows what the UK will look like as the transitional period nears its end. What is certain is that Brexit is no longer at the heart of the public discourse.