Polish PM Sacks Coalition Partners Ahead of Early Elections | Europe | News and current affairs from around the continent | DW | 13.08.2007

After a call for new elections, Polish Prime Minister Jaroslaw Kaczynski sacked four government ministers from his junior coalition partners and declared the coalition for finished. 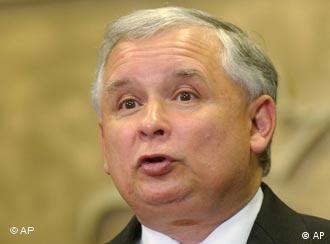 The prime minister fired ministers from the nationalist League of Polish Families and rural-based Self-Defense Party on Monday and replaced them with members of his own Law and Justice Party.

The Polish prime minister was given the go-ahead to push for a snap parliamentary vote by his party on Saturday. The League of Polish Families had already announced it was quitting the coalition.

Kaczynski announced the likely date of elections after the Law and Justice party meeting.

"It could be October 21, or perhaps a week earlier or later," he said. "It doesn't matter. It will be November at the latest." 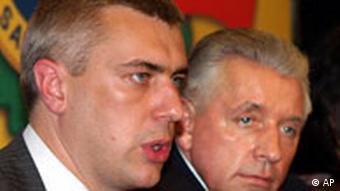 Polls suggest that Jaroslaw and his twin brother, Poland's President Lech Kaczynski, are unlikely to come out on top in the approaching election, which is coming two years ahead of schedule.

The most recent surveys from the TNS OBOP institute shows the opposition liberal Civic Platform party with 33 percent of the vote compared to 22 percent for the PiS.

Meanwhile, analysts said that the rural Self-Defense party and the nationalist League of Polish Families may not even pass the 5 percent threshold required to win seats in parliament.

Poland has seen fast economic growth under the Kaczynski brothers, but they have gained a reputation as troublemakers in the European Union and have fought almost constantly with their domestic coalition partners. 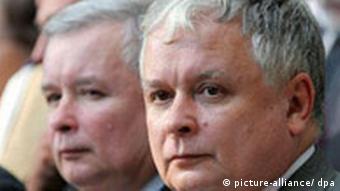 The Kaczynski twins have gained a reputation as troublemakers

Early elections have been in the cards since early July when the premier sacked Andrzej Lepper, the deputy prime minister and leader of Self Defense over corruption allegations.

Lepper, who has denied any wrongdoing, was questioned on Sunday by investigators examining the land sales that led to his sacking.

The forthcoming election campaign looks set to be just as acrimonious as the current row.

LPR leader Giertych said the prime minister had told him he had tapes of top politicians that were so shocking they would "make people's shoes fall off." A government spokesman has denied this.

Parliament reconvenes on Aug. 22 after its summer recess and could decide then to dissolve itself ahead of new elections. The president, who has already given his backing to early elections, would not face re-election.

Poland's Prime Minister Jaroslaw Kaczynski said Saturday his governing Law and Justice party will push for early elections to end the strife within his struggling coalition. (11.08.2007)

Germany has handed over the EU presidency to Portugal. For the next six months Premier Jose Socrates, seen as a tough reformer at home, will face the challenge of his career: keeping the EU treaty process on track. (01.07.2007)