A 17-year-old Afghan refugee, whose ax attack on a train in Bavaria left five people injured, appears to have been radicalized in a short period. Officials confirmed an IS-released video of the teenager to be authentic. 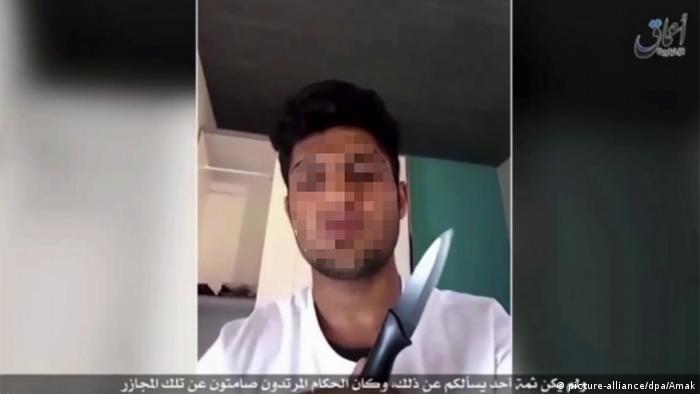 Officials said on Tuesday evening that the attack appeared to have an Islamist-religious background, with the 17-year-old appearing to seek "revenge" against non-believers.

The attack took place on Monday evening, when the teenager went on a stabbing rampage after boarding a train near the Bavarian city of Würzburg. The suspect, who allegedly shouted "Allahu Akhbar," (God is great), was shot dead by police shortly afterward.

Five people were injured including four from the same Hong Kong family. Two of the injuries were said to be serious.

Lothar Köhler, from the Bavarian State Criminal Police Office, said on Tuesday evening that officers had found a draft goodbye letter from the teenager to his father.

The text was written in a note pad that contained passages in Pashtun and Arabic, as well as hand drawn symbol of the militant terror group "Islamic State."

Köhler said that while the teenager had an online presence, there was no indication that he had been radicalized until very recently. Shortly before the ax attack, he had posted a "cryptic message" to "enemies of Islam."

Shortly before the attack, on Saturday, the 17-year-old had learned that a friend had been killed, Köhler said. The news had appeared to have left a "deep impression" on him. While he was a Muslim by faith, the teen was not said to regularly attend mosque. He was not on the radar of police, or intelligence services.

The "Islamic State" (IS) mouthpiece Aamaq on Tuesday published a video featuring an individual that the militant group identified as the perpetrator of the attack. In the clip, a young man resembling the teenager is seen with a knife, saying he will use it to kill infidels.

The video was confirmed to be genuine on Tuesday evening by the Bavarian Interior Ministry.

Speaking earlier on German television, Bavarian Interior Minister Joachim Herrmann said investigators were making contact with people involved with the 17-year-old. He had been living in Würzburg since March, in a home for minors who had travelled to Germany unaccompanied to seek asylum. The foster family home where he had lived for the past two weeks was searched. "A hand-painted IS flag was found in his room," Herrmann said.

Aamaq said IS claimed responsibility for the attack and that the 17-year-old was its "fighter." The claim was phrased in a similar way to the IS response to the Bastille Day truck attack which killed 84 people in Nice, France last week.

In the wake of the Würzburg train attack, police are focusing their investigation on an "unaccompanied minor refugee." There are tens of thousands of such refugees in Germany. Here's an overview of the key facts. (19.07.2016)

Berlin officials have been noticeably quiet following the bloody attack in Würzburg. One, however, has drawn backlash. In Munich, Bavaria's interior minister sounded a warning bell. (19.07.2016)