The Italian and Kosovar authorities have detained four people suspected of threatening Pope Francis in support of 'Islamic State' (IS). The group leader allegedly tried to recruit fighters from Kosovo. 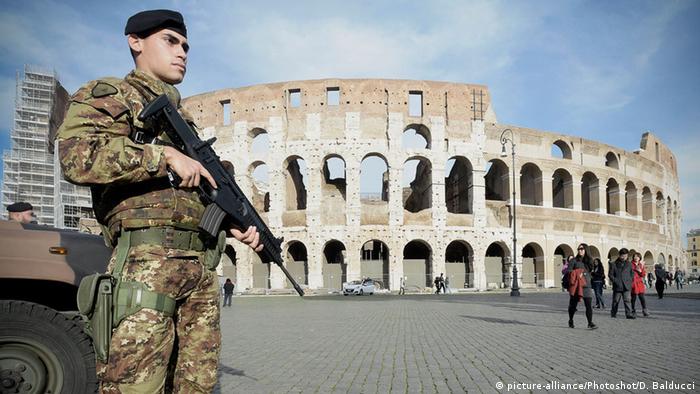 The four Kosovars are suspected of forming a jihadist cell and spreading Islamist propaganda, Italian authorities said on Tuesday.

"They were threatening the pope, celebrating the recent attacks in Paris and threatening the former US ambassador to Kosovo," said Carmine Esposito, a police chief in the northern Italian city of Brescia.

The group posted pictures of themselves online with weapons "in circumstances characteristic of Islamic State fighters." The most alarming online messages were aimed at Pope Francis, according to prosecutor Tommaso Buonanno.

One of the messages read: "Remember there won't be any pope after this one. This is the last."

Three of the men were arrested in a series of raids in northern Italy, while the Kosovar police detained the alleged leader in the Balkan country.

The authorities found weapons and electronic equipment while searching a Kosovo residence.

"A joint operation with the Italian police is an indicator of the international cooperation which is necessary for fighting terrorism," the Kosovo police said in a statement.

The man, arrested south of Pristina, allegedly had fighting experience outside Kosovo.

The suspect had lived in Italy earlier. The police believe he was also involved in the IS recruiting effort, trying to find fighters from Kosovo willing to go Iraq and Syria.

The authorities did not provide details on any specific terror incident involving the recently arrested group. At least two of the men detained in Italy are to be deported to Kosovo, due to the lack of evidence for prosecution.

"We intervened during a period of propaganda and criminal apology before it could become a problem," said Giovanni De Stavola, the head of the counterterrorism office Brescia.

Italian authorities are concerned over terror threats during the so-called Jubilee of Mercy, a religious event starting on December 8. Officials in Rome and at the Vatican expect millions of pilgrims during the "holy year" declared by Pope Francis.

The ruling coalition in Kosovo has barred the opposition from attending a parliamentary session, after opposition hardliners activated tear gas in the chamber. The government critics urged people to join street protests. (30.11.2015)

Germany's Cabinet has approved a mandate offering military assistance in the fight against the self-declared "Islamic State" (IS) in Syria. The package still requires parliamentary approval. (01.12.2015)