Police clash with protesters as suicide blast hits Tehran shrine | World| Breaking news and perspectives from around the globe | DW | 20.06.2009

Riot police and thousands of protesters squared off in Tehran's Revolution Square as Iranian state media reported that a suicide bomber was killed and two others injured at a shrine in the southern part of the capital. 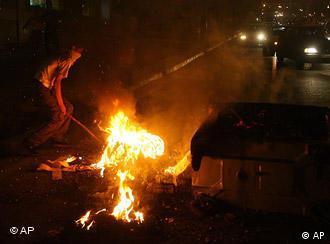 An unidentified bomber blew himself up at the mausoleum of the father of Iran's revolution, Ayatollah Ruhollah Khomeini, in an attack which coincided with more unrest over a disputed presidential vote.

"A few minutes ago, a suicide bomber exploded himself in the shrine," police official Hossein Sajedinia was quoted by the semi-official Mehr news agency as saying.

Two people were wounded in the incident in the northern wing of the shrine, another news agency, Fars, said.

In Revolution Square, thousands of protesters and riot police clashed as the police used water cannons and tear gas to disperse the crowds who had gathered to protest in open defiance of Iran's cleric-led government.

Earlier, Iran's highest legislative body said it was prepared to recount a tenth of the votes, but supporters of the opposition have been demanding a complete annulment of the presidential poll.

Iran's supreme leader, Ayatollah Ali Khamenei, warned protest leaders on Friday that they would be responsible for any bloodshed if rallies continued against the June 12 election, which he said the incumbent President Mahmoud Ahmadinejad had won fairly by 11 million votes.

The protests had been cancelled 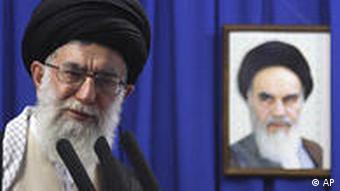 The group, which planned to organize the rally, had said it would not go ahead with the demonstration because it did not receive the required permission to do so from the authorities.

The Combatant Clerics Assembly (ACC), a group of moderate clerics, said it and supporters of opposition leader, Mir Hossein Mousavi, were issued a stern warning not to encourage demonstrators to gather in the capital, Tehran.

The ACC, which is close to Mousavi and former president Mohammad Khatami, believes that massive fraud took place in last week's presidential ballot, which led to the re-election of incumbent president, Mahmoud Ahmadinejad.

Iran's Interior Ministry said on Saturday that Mousavi would be "held responsible for the consequences of any illegal gatherings." Earlier, the ministry said that the 67-year-old former prime minister had backed protests, which had caused a "disruption of security and public order."

Police ready to deal with protesters 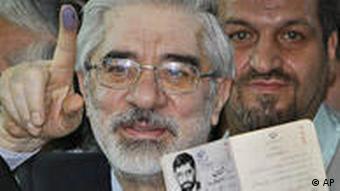 Mousavi has not been seen in public after government warnings

Radan was quoted by the semi-official Far News Agency as saying that "police will deal with it firmly and with determination."

"I should emphasize that all protests held in the past week were illegal and beginning today any gathering critical of the election would be illegal," Radan said.

Iran's ILNA new agency also reported that Mousavi and another defeated presidential candidate, Mehdi Karroubi, failed to attend a meeting on Saturday with the Guardian Council, the country's electoral watchdog.

After that meeting, state television reported that the electoral body planned to randomly recount up to ten percent of ballot boxes.

Meanwhile, foreign media carrying news stories on events inside Iran have also been publishing the caveat that their coverage has been subject to severe restrictions on their ability to report.

The lines in the sand are drawn in Iran. The opposition wants new elections, but the country's supreme leader has reiterated the election victory by President Ahmadinejad. So what should Europe and the US do now? (19.06.2009)