Israeli police have arrested three ultra-Orthodox Jews for spraying hate speech on the Yad Vashem Holocaust memorial in Jerusalem. The men apparently admitted they had defaced the site as well as two army memorials. 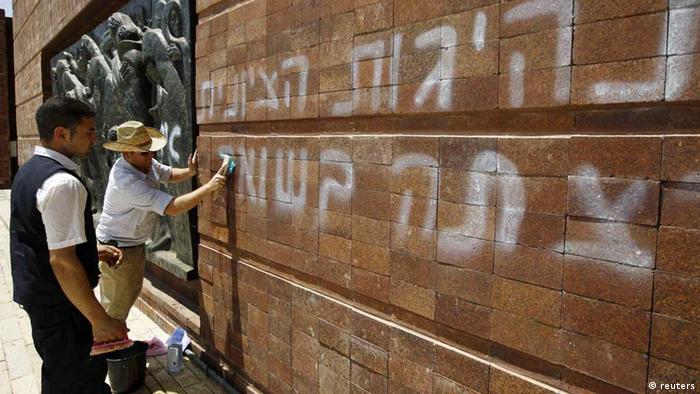 The men were due to appear in court later on Tuesday. Aged 18, 26 and 37, they came from Jerusalem, the southern Israeli port city of Ashdod and Bnei Brak, a religious suburb near Tel Aviv, police spokesman Micky Rosenfeld said.

"The suspects were questioned in connection with the graffiti in Yad Vashem and admitted to carrying out the incident as well as other similar incidents in Jerusalem's Ammunition Hill and a memorial in the Jordan Valley," Rosenfeld told the AFP news agency.

The pro-Hitler and anti-Zionist graffiti were found on numerous walls at the national Holocaust memorial two weeks ago. One of the Hebrew slogans said "Hitler, thank you for the Holocaust." Another said "If Hitler hadn't existed, the Zionists would have invented him." A third was signed "world ultra-Orthodox Jewry."

Similar slogans were found sprayed on the Israeli army sites at Ammunition Hill, a former Jordanian military post in Jerusalem, and a West Bank memorial for fallen soldiers and policeman in April.

Some extremist Jews reject the existence of Israel in the belief that a Jewish state should only be established once the Messiah returns.