A blaze in a three-story building in southern China has claimed the lives of 18 people. Police have arrested a man in connection with the fire, which they believe was started deliberately after a bar fight. 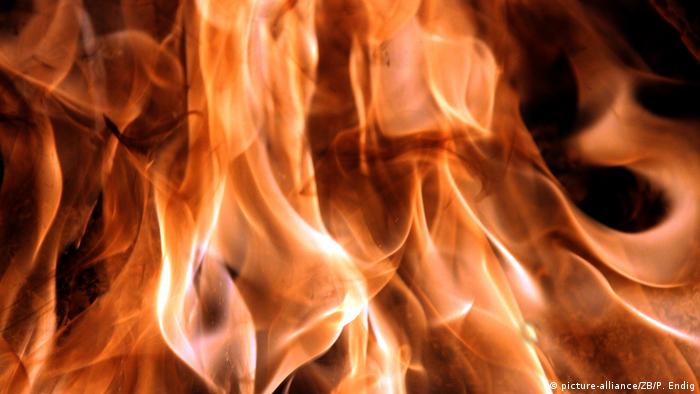 A fire at a karaoke bar in a three-story building in China killed 18 people and injured five others on Tuesday, according to local authorities.

The fire occurred in Qingyuan City in the southern province of Guangdong. Police arrested a 32-year-old man in a nearby village in connection with the blaze.

The public security bureau said it had received a call at around 12:30 a.m. local time (1630 UTC) about the fire and that fire, health and other departments sent rescuers to the scene. It added that the blaze was extinguished less than a half-an-hour later and that the injured were taken to the hospital.

A preliminary investigation into the incident found that the fire was set intentionally, the bureau said on its Weibo social media account.

According to public broadcaster CCTV, the suspect got into an argument before allegedly blocking the door with his motorcycle and lighting the fire.

A video from the scene posted on Twitter by state-run newspaper Global Times showed the building engulfed in flames as a crowd looked on.

Deadly blazes and industrial accidents are common in China, and are often blamed on negligence.

In December, 21 people were jailed after a nursing home fire killed 38 people in Henan province in 2015. Additionally, more than two dozen people were killed in two fires in Beijing's migrant neighborhoods late last year, the second of which prompted authorities to tear down unsafe buildings in China's capital.

Last July, a man was arrested under suspicion that he set a fire to a two story building near Shanghai that killed 22 people.

Audrey Jiajia Li was a prominent TV journalist in China, but she quit before getting fired for complying with the official line. Now seeks freedom of speech on social media - but still lives with fear. (14.08.2017)

Despite the threat of a trade war with the US, China's economic growth has exceeded expectations, allowing an opportunity to address certain problems, says DW's Frank Sieren. (23.04.2018)