Several thousand activists rallied on Saturday in Poland's annual gay rights parade. There was a large police presence at the event to keep counter-protests from interfering with the parade. 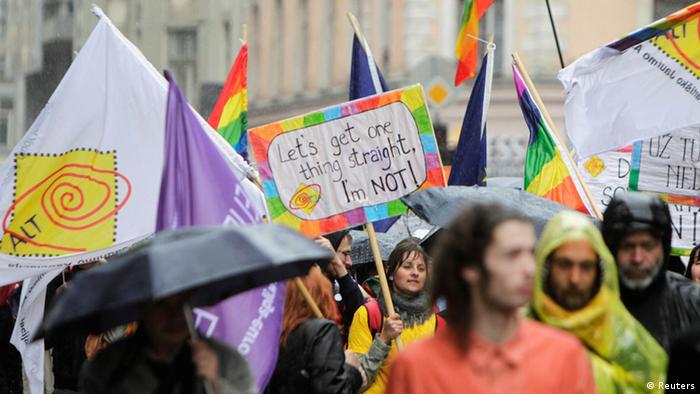 In a move to protect marchers from clashes with 13 other counter-demonstrations in Warsaw on Saturday, organizers changed the route of Poland's annual gay rights parade one day before the protest due to legal counter-marches that could not be stopped by police or city officers.

More than 4,000 Polish gays, lesbians and their supporters marched under the banner "Simply Equality" demanding equal rights for homosexuals, sexual education in schools including homosexuality, better legal right's for non-married couples, and improved city infrastructure for people in wheelchairs.

Left-wing political parties like the Democratic Left Alliance and the Palikot's Movement party, who were responsible for bringing parliament its first gay and transsexual legislators, took part in the rally, along with British Ambassador Ric Todd. Todd said he participated in the protest because he was against discrimination, and said that Poland was a tolerant country.

Celebrations following the parade were expected to run into the night.

Polish gays and lesbians are becoming increasingly more visible in a society that has long treated homosexuality as a taboo topic, in part due to the influence of the Roman Catholic Church.

Several hundred activists from the Baltic states endured wintry weather to participate in the gay and lesbian rights parade being held in Riga, Latvia on the same day. US diplomats who took part in the event on Saturday urged the fundamental importance of equal rights and freedom of expression, as well as urging participants to keep fighting for their cause.

Saturday's demonstrations in Warsaw and Riga are just two of many gay pride events planned in Europe for June.