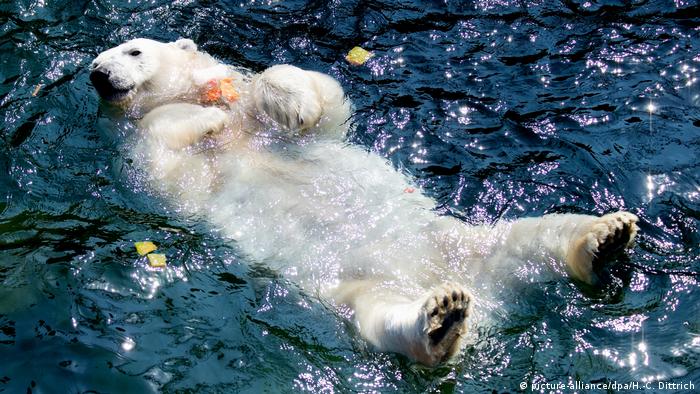 It marks the first time that polar bear cubs have been born at the zoo.

A specially installed video camera shows Milana giving birth to a cub, about the size of a guinea pig, and then lying down on her side and licking it and holding it between her front legs to keep it warm.

One cub was born on Wednesday and the other on Thursday, but one of them died shortly after birth.

"From the experiences of other zoos, we are aware that the first 10 days are particularly critical," said Klaus Brunsing, the zoo's director.

"Soon after the births, Milana was exemplary in caring for both cubs," Brunsing added.

The Melting Arctic - In the Realm of the Polar Bear

The Melting Arctic - In the Realm of the Polar Bear

First sightings in the new year

No one will be allowed to go anywhere near the birthing cave, as absolute quiet is important for raising the cub successfully, according to a statement posted on the zoo's website.

As in the wild, it is expected that Milana will leave the cave for the first time in early 2020.

Until this time, Milana and her cub's well-being will be monitored through cameras that also pick up the sound that the cub is making.

The father of the cubs, Sprinter, first met Milana in 2017, when she arrived from Russia, and the pair hit it off almost immediately.

However, male polar bears have nothing to do with the raising of cubs, and Sprinter is already back in the polar bear enclosure.

Polar bears are classed as an endangered species, according to the International Union for Conservation of Nature. There are around 20,000 to 25,000 polar bears living in their natural habitat in the Arctic.

Nord Stream 2: US lawmakers agree to widen sanctions on Russian-German pipeline 14m ago

Israel has 'no confidence' Iran deal is working, ambassador tells DW 3h ago