The ministry said "physicians must not be afraid to make obvious decisions" after the death of a pregnant woman triggered nationwide protests. 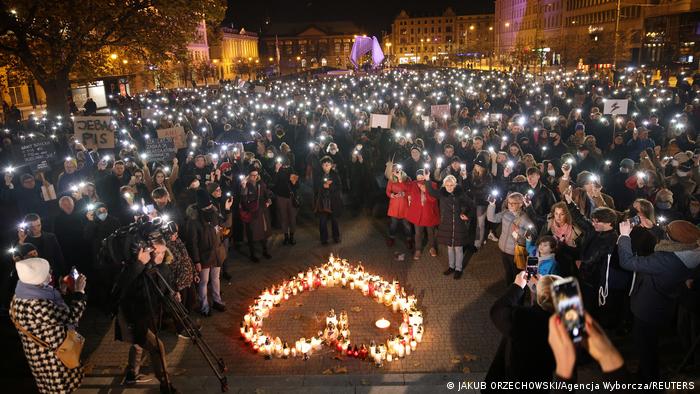 Tens of thousands of people took to the streets after the death of Izabela, a 30-year-old pregnant woman

Poland's Health Ministry on Sunday issued guidelines to doctors for when abortion is legal, given it is severely restricted in the Catholic country.

A day earlier, nationwide protests erupted after the September death of 30-year-old pregnant woman became known. She had died of sepsis 22 weeks into her pregnancy.

What did the ministry say?

The ministry's instructions on Sunday, a day traditionally reserved for church mass and family, confirmed that it is legal to terminate a pregnancy if or when the mother's life is in danger.

The statement read in part, "It should be strongly emphasized that physicians must not be afraid to make obvious decisions, based on their experience and available medical knowledge."

The Health Ministry revisited guidelines on abortion rights amid confusion over the restriction forbidding termination in the case of fetal deformities.

In Pszyczyna in southern Poland, a woman 22 weeks into her pregnancy died in September after doctors would not terminate her pregnancy, even though the fetus lacked sufficient amniotic fluid to survive.

The ministry's instructions about insufficient amniotic fetal fluids were included in the guidelines.

The doctors involved in the case have been suspended while prosecutors investigate the incident.

Poland saw another wave of massive protests over the weekend, blaming the woman's death on Poland's restrictive abortion law.

"Not one more" was a protest slogan over the weekend, with the Warsaw mayor posting on Instagram a hashtag version of the Polish language slogan.

Until 2020, women in Poland were allowed abortion if the pregnancy was due to rape, if the mother's health or life is at risk or if the fetus is severely disabled.

The last possibility was removed when the Constitutional Court ruled in 2020 that fetal defects was insufficient grounds to terminate a pregnancy.