Polish authorities reported finding the body of a man and a Nigerian passport at a forest near the border with Belarus as groups of migrants remain stranded in poor conditions. 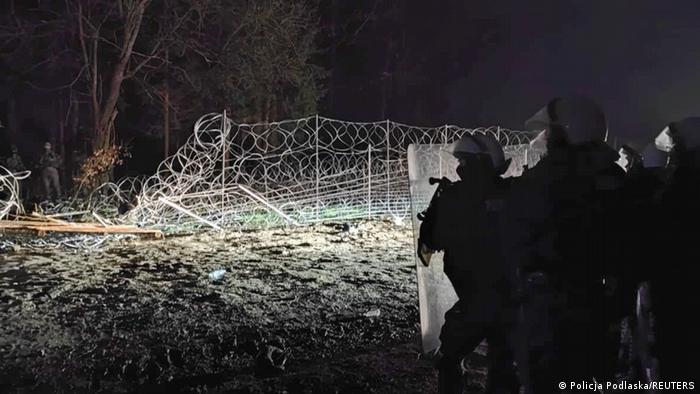 Polish soldiers found a body of a migrant in the border region with Belarus, a police spokesperson said Wednesday.

In recent weeks, authorities in Poland have reported multiple deaths near the border with Belarus amid a standoff between Minsk and Brussels over migrants.

Around a dozen people have been found dead along the border. Rights and aid groups warn the toll could be even higher.

"The body was found in a forest near Olchowka in the Narewka commune yesterday," local police said on Wednesday.

The soldiers found the body of the man, a backpack and a Nigerian passport.

Polish border guards said on Wednesday that a group of 35 migrants forced their way across the border overnight, also saying that the Belarusian military had helped them cross. They were all caught and sent back.

Czech Defense Minister Lubomir Metnar said his government on Wednesday approved the deployment of up to 150 soldiers to aid Poland in stopping migrants seeking entry from Belarus.

If the parliament approves the plan, the Czech Republic will become the third country not directly involved in the standoff to offer sending personnel to the Poland-Belarus border after Estonia and Britain.

Groups of migrants, mostly from the Middle East, have been stuck in dire conditions as they seek to get into the European Union territory from Belarus to Poland.

The EU accuses  Belarusian leader Alexander Lukashenko's government of orchestrating the situation at the border in retaliation to previous sanctions. Minsk denies the allegations that it has been encouraging the migrants to seek access to neighboring EU countries Poland, Lithuania and Latvia, to pressure the EU.

Earlier this week, Poland accused Belarus of aggravating the situation at the border by throwing firecrackers or taking other actions. Belarus denied the accusations.

Meanwhile, Lithuania on Tuesday extended a state of emergency along its border with Belarus until mid-January.

With freezing cold weather and a political standoff between Minsk and Brussels, some of the migrants returned to their home countries, while others remained in limbo.

The Polish government estimates some 7,000 migrants are still in Belarus.

"We estimate that the Lukashenko regime sent back about 3,000 migrants to Iraq and Syria, but considerably more, about 7,000, are still on the territory of Belarus," intelligence services spokesperson Stanislaw Zaryn told the Polish PAP news agency on Tuesday.