Hundreds of people have gathered in front of the Polish parliament to protest plans to tighten access to abortions in the mainly Catholic country. Lawmakers proposed changes to the abortion law earlier in the week. 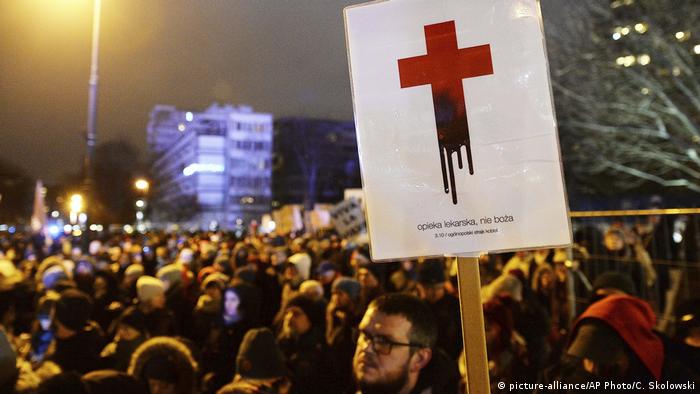 Around 2,000 people gathered in front of the Polish parliament in Warsaw on Saturday, carrying signs with slogans that said "Shame!" and "Women will die without abortions."

"The women whose rights and freedoms are being violated today have been left to face this problem alone," said Anna Karaszewska from the Let's Save Women 2017 pressure group. "The politicians lied to us."

Let's talk about sex - not in Poland

Let's talk about sex - perhaps not in Poland

The rally followed Wednesday's decision in the lower house of parliament to work on a bill to ban abortions even in the case of irreversible damage to a fetus.

"If enacted, the Stop Abortion amendment would inevitably place women's health at risk and deprive them of a right recognized in international human rights law," Anna Blus, a researcher on women's rights in Europe with Amnesty International, said after the decision.

Maja, a 25-year-old protester at Saturday's rally, said she was taking part "because the government is enforcing solutions that hit women, ignoring women's voices.

"These changes are being introduced without any consultations," she told the Reuters news agency.

Poland already has some of the strictest restrictions on abortion in Europe. The ruling conservative Law and Justice (PiS) party is supported by the country's powerful Catholic Church and has been promoting religious values in public life. PiS party leader Jaroslaw Kaczynski has said abortions due to damage to a fetus must be outlawed.

Laws passed in 1993 banned all abortions except in the case of rape or incest, or if the pregnancy posed a health risk to the mother or the fetus was severely deformed. Access to contraception has also been tightened.

"The PiS is pushing its own barbaric agenda and opposition politicians are scared of their own shadow," claimed Agnieszka Dziemianowicz-Bak, a member of the leftist Razem ("Together") party, who took part in Saturday's rally.

In 2016, about 1,100 legal abortions were carried out in Poland, with 1,042 of the procedures due to a damaged fetus. Estimates of the number of illegal abortions range from between 10,000 to 150,000 per year, according to Poland's oldest reproductive rights organization, the Federation for Women and Family Planning.

A recent poll found 11 percent of respondents in favor of further restrictions on abortions, while 46.5 percent preferred to see them eased, according to the Rzeczpospolita newspaper.

Is democracy at risk in Poland?