Gay rights are increasingly under threat in Poland, endorsed by the government. Far-right nationalists arranged a "stop aggression by LGBT" rally in Warsaw, prompting supporters of the LGBT+ community to confront them. 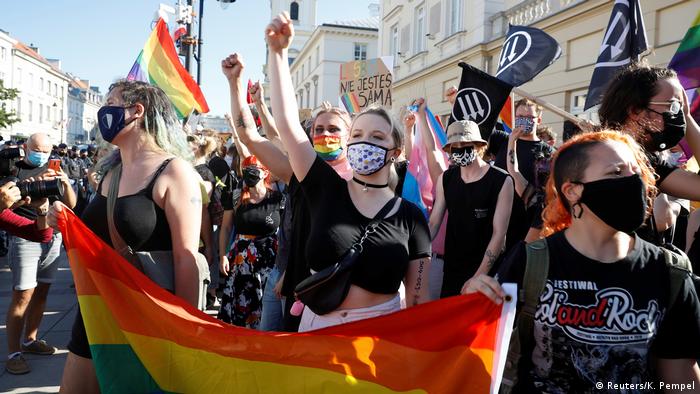 Hundreds of Polish nationalists and defenders of gay rights faced off in central Warsaw on Sunday, amid a deteriorating situation for the country's lesbian, gay, bisexual and transgender (LGBT+) community.

Both groups shouted abuse at each other in front of Warsaw University's main gate. A line of police officers separated them.

The nationalists burnt a rainbow flag — the symbol of LGBT+ social movements, while the LGBT+ demonstrators and supporters painted one on the street.

Recently, 48 gay-rights activists and supporters were detained after protesting the arrest of an activist — accused of hanging rainbow flags over statues in Warsaw.

Gay rights was a divisive issue in the recent presidential election campaign. Incumbent president, Andrzej Duda – an ally of the ruling far-right Law and Justice Party (PiS) — compared what he called LGBT "ideology" to communist doctrine during his campaign, sparking criticism.

Polish LGBT+ group Campaign Against Homophobia tweeted an image of the far-right demonstration as well as an image of the rainbow flag painted by LGBT+ activists — ahead of the nationalists arriving.

"Where they plan to shout slogans of hate, a symbol of the fight for freedom, equality, love and democracy is waiting!"

The group's former leader, Krzysztof Bosak, won nearly 7% in the first round of a presidential election in June.

"This is a toxic ideology, dangerous, revolutionary and radical," Bosak said in a speech during the gathering.

Members of nationalist groups the National Movement and the March of Independence also participated.

PiS has embarked on a program of rolling back liberal freedoms — particularly for women and the LGBT+ community.

During the coronavirus lockdown, women protested against the proposed tightening of already-strict abortion laws.

This year, some municipalities signed a "family charter" that calls to promote the traditional family and exclude those with sexual and gender differences.

Left-wing parties have held a rally in the Polish city of Bialystok against homophobia. An LGBT rights march in the city last week came under attack from far-right groups.

Mayor Rafal Trzaskowski said he wanted the city to remain "open" and "tolerant." The LGBT community in Poland has come under sustained attack in recent months by the ruling right-wing Law and Justice party.