An increasing number of German consumers are making their Christmas purchases with plastic instead of cash. But the growing popularity of debit cards also makes it more difficult to keep tabs on personal finances. 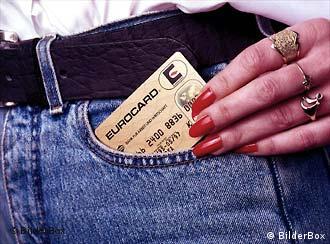 Cities and towns across Germany are bustling with Christmas shoppers at the moment. Visit any large department store, for example, and you'll be sure to find one-third of customers pulling out their debit or credit cards to pay for those Christmas gifts.

The popularity of plastic payment methods is not just limited to the holiday season, though. EHI, a Cologne-based research and education institute within the retail industry, has been conducting studies on card-based payment systems for over 10 years.

"We've seen strong growth in particular in debit card use over the past decade," said EHI's Horst Rüter. According to institute figures, 31.6 percent of the 350 billion euros ($420 billion) in retail sales last year were paid with debit and credit cards. 64.9 percent of consumers paid cash.

In 1994, cash payments totaled 78.7 percent of sales, with plastic payment methods amounting to only 6.2 percent.

While credit cards are very popular in countries such as the United States and Britain, they continue to play a much smaller role in the German retail sector. 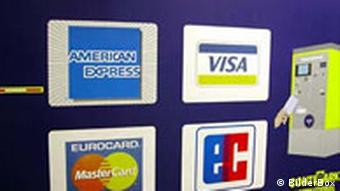 Credit cards have still not gained solid ground in Germany

Their share of payment methods has risen from 3.3 percent to 5 percent over the past 10 years.

Rüter said this small growth was mainly due to the overdraft limit German banks offer their customers. It allows people to overdraw their checking accounts and pay interest on this amount.

"So, there's really no need for someone to have a credit card, as the overdraft fees are only slightly higher than credit card interest rates," said Rüter.

Although many people choose to use their debit or credit card out of convenience, this payment form does have its shortcomings.

Jutta Büttner from North Rhine-Westphalia's Consumer Protection Agency said paying for something in cash helped keep people aware of when their money was gone. But with card payments, they constantly needed to be doing book keeping in their heads.

"You can quickly lose track of your financial situation unless you check your account balance everyday," said Büttner. "Few people do that and before you know it, you've slipped into your overdraft and are in debt."

According to the German Association of Consumer Protection Agencies, over three million households in Germany are heavily indebted. Büttner said debt was especially a risk for young people between the ages of 20 and 30. 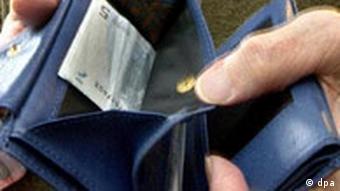 "They have grown up in a card culture and haven't learned to deal with money in a tangible sense," said Büttner. The older generation, though, would rather pay with euros.

"They prefer to have the cash in their pockets and therefore know how much money they have," said Rüter.

Ulrike Hörchens from the German retail association HDE said if retailers had a choice, they would prefer cash.

"You sell your wares and get cash," she said. "It's very simple."

Not only that. Card-based payments cost more. In the case of PIN-based debit transactions, merchants have to pay a 0.3 percent fee or at least eight cents with each transaction. Signature-based debit purchases are free of charge. 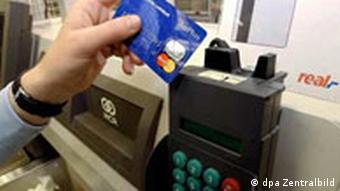 Rüter agreed that the retail industry would much prefer cash if the pressure from consumers weren't there. But it's a marketing issue, he said.

"The customer is the king. If that's what he wants, give it to him," said Rüter.

Cash is here to stay

The United States is probably the most card-oriented society in the world. According to the American Bankers Association, US consumers now make 52 percent of their in-store purchases with a debit or credit card, compared to 33 percent with cash.

Although Germany is far from US cash standards, it has changed over the past decade.

"Anyone who says Germany is a cash society is wrong," said Rüter. Yet it will remain the most important payment method.

"Germans are very conservative in this sense," said HDE's Hörchens. "Cash is traditionally the means of payment and it will continue to be so."

Rüter said EHI expected card payments to increase moderately in the next couple of years. But in 2008, they will reach some 40 percent. "This will be saturation then," said Rüter.

Mold Them While They're Young

Teenagers have money -- and lots of it. One recent study said that German youths have almost 23 billion euros at their disposal. Companies know that once they've won over a teen, they've probably won over the family. (June 12, 2005)

A study shows that increasing numbers of German households are unable to manage their debt. Meanwhile, some states are freezing or cutting funding for debt counselling programs, leaving debtors in the lurch. (Oct. 24, 2004)