No Marco Reus, no problem for Borussia Dortmund. Christian Pulisic stepped into his shoes and produced a fine performance as the Bundesliga side swept Benfica aside, with a little help from Pierre-Emerick Aubameyang. 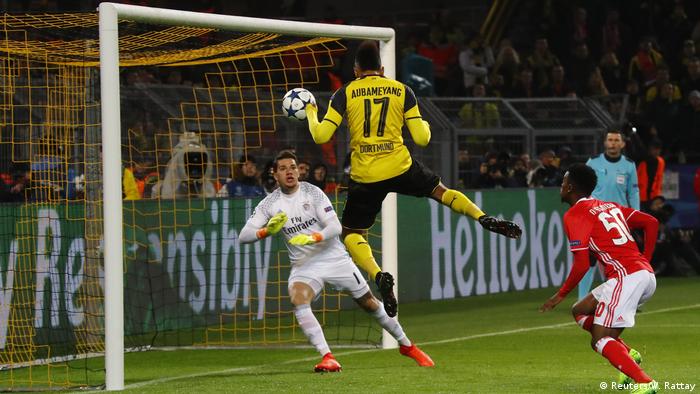 Pierre-Emerick Aubameyang scored a hat trick as Borussia Dortmund made light work of Benfica to reach the last eight of the Champions League.

Two weeks ago in Lisbon, Dortmund eclipsed Benfica in possession, shots on goal and even corners, but somehowlost 1-0 to a solitary goal from Kostas Mitroglou.

Thomas Tuchel’s side were without Marco Reus, whose injury curse struck again last weekend and faces another spell on the sidelines, but that didn’t stop Dortmund flying into an early lead.

Ousmane Dembele’s corner was flicked on by Christian Pulisic, in for Reus, and Aubameyang took advantage of shoddy Benfica defending to power in a header at the far post.

But rather than press on and exert their influence, Dortmund allowed Benfica to steady the ship and they even mustered a chance to level midway through the first half when Durm hesitated, but Cervi’s shot was too close to Bürki in the Dortmund goal.

Benfica came out strongly at the start of the second half, but Dortmund seized control of the game just before the hour mark – and their second of the night was a delightfully taken goal by American teenager Christian Pulisic.

The 18-year-old latched onto Lukasz Piszczek’s guided throughball and delicately chipped it over the advancing Benfica goalkeeper Ederson, and in doing so became the club’s youngest ever scorer in Europe’s elite club competition.

This time Dortmund struck while the iron was hot and grabbed a third soon after. Two minutes to be exact, and it came courtesy of Aubmayeng again. Julian Weigl’s pinpoint pass to the left wing was destined for Dembele, but Marcel Schmelzer muscled out his teammate to flash a brilliant low cross into the Benfica six yard box, and Aubameyang simply steered it in from close range.

Aubameyang has rediscovered his scoring touch to devastating effect, having scored two goals in each of his last three games, having scored only one in his first six after returning from Gabon’s unsuccessful Africa Cup of Nations campaign.

But he wasn’t done there. Pulisic again shone in his supporting role in the Dortmund attack, delivering a perfect cross from the right for Aubameyang to sweep the ball in from close range to complete his hat-trick.

The Portuguese champions were well beaten in the end and, in this form, few teams will want to face Dortmund.

Champions League round of 16 live
Advertisement