Physicists at the Technical University of Munich have used 'optical tweezers' to reveal the secrets of correct protein folding. They hope to learn more about the structure of proteins and what makes them work. 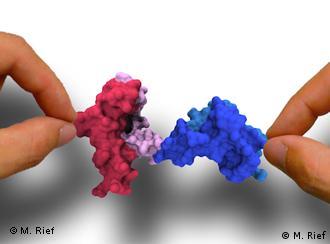 Physicists at the Technical University of Munich (TUM) say they have used high resolution "optical tweezers" to pull protein molecules apart to study the way they fold and unfold and how the "fold" can make us prone to common diseases. Their results are outlined in Friday's edition of the journal, Science.

By pulling molecules apart, the physicists - led by Matthias Rief, a professor of physics at TUM - say they have been able to reveal "a complex network of intermediate structural and kinetic states along the way to functionally correct folded forms."

Proteins fold from a so-called "random coil" - once in this shape, they can take their function within the body. Researchers say a better understanding of how protein molecules fold is essential because incorrectly folded proteins can cause diseases like Alzheimer's and Parkinson's.

"At the moment we're not actually working with proteins that have anything to do with Alzheimer's or Parkinsons, but we think that in the near future we might be able pin point where and at what point a protein has gone wrong in the folding process and also determine what effects that error could have," he added. 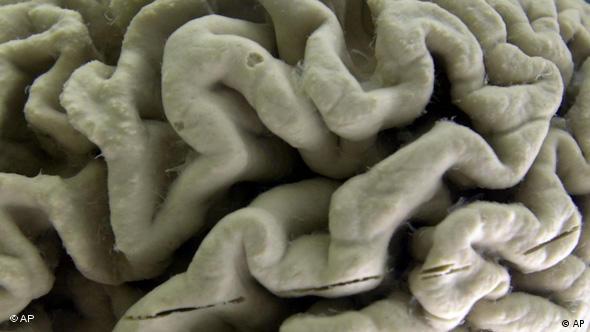 'Incorrectly' folded proteins can cause neuro-degenerative diseases like Alzheimer's

The structures of proteins determine how well they work. To see those structures, researchers have been developing methods such as X-ray structural analysis to get snap shots of protein folding.

But single-molecule force spectroscopy - which Rief and his colleagues pioneered - produces moving images of the process. These images are a little blurred, but they offer physicists a unique look at the dynamics of the folding process.

"Until now it's been difficult to measure the folding process because molecules are so damn small," Rief said.

"We have other methods to measure the structure of a protein, but only our method can measure the dynamics, and that's important because the other methods only give you static pictures of isolated moments and you have to interpret what might have happened inbetween. Now, we have the full picture."

It then folds into a three-dimensional structure to give it the functionality that we need for a healthy life. If the fold is bad - or incorrect - the protein will not function properly and can cause common neurological diseases.

Rief and his team focused on the protein calmodulin - which is not usually associated with Alzheimer's and Parkinson's, but which is vital to cellular functions. 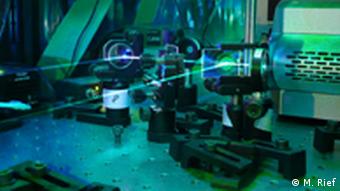 And they used an ultra-stable, high resolution tool described as "optical tweezers" to trap the molecule between opposing laser beams - as delicately as if being held between a thumb and forefinger.

In essence, the researchers used the optical tweezers to pull the ends of a single, folded calmodulin molecule until it straightened out and then to reduce the tension to allow it to fold again.

As the molecule folded, the researchers constantly measured the protein's length, its mechanical forces and the time it took to fold, with extreme precision.

They found that the calmodulin molecule folds via a complex network of pathways, which they call its "energy landscape."

"We now have the ability to directly watch a single molecule," said Rief. "Understanding this is a challenge for the future."

Other scientists in the field say they are impressed by Rief's results, but there are many questions that remain as to how this technique can be applied "in vivo" - within a live organism.

"The importance for better understanding of protein folding in vivo is questionable," wrote Pernilla Wittung-Stafshede, a professor of chemistry at Umeå University in Sweden, in an e-mail sent to Deutsche Welle. "It is a very artificial system to pull in each end of the polypeptide and the endpoint, the extended conformation, is very different from in vivo and just free in solution as the all the entropy is lost."

A trio of immunologists has won the 2011 Nobel Prize for Medicine for revolutionizing understanding of the human immune system. One of the recipients, Ralph Steinman, passed away days before the announcement. (03.10.2011)

Non-dairy ice creams often disappoint. But German scientists have created a new dessert made from lupin plants that may be just what lactose-intolerant eaters ordered. (23.08.2011)

US and French researchers have made a discovery that may lead to new ways of treating and preventing a severe form of epilepsy. They have uncovered the switch that transforms healthy brain cells into epileptic ones. (28.06.2011)