The often controversial president has said he will not take part in elections in June 2022, opting to step down at the end of his term. 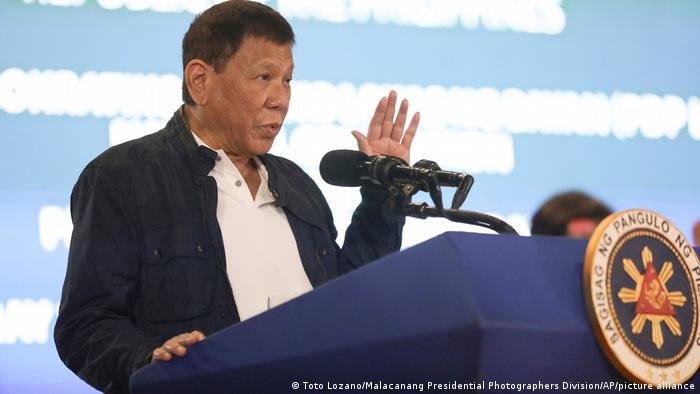 During his presidency, Duterte has earned a reputation for pugnacious remarks and a brutal drug war

The president of the Philippines, Rodrigo Duterte, said on Saturday that he will not stand for election next year and would step away from politics.

Duterte came to power in 2016. He said he will not stand for election as either president or vice president in the upcoming June 2022 elections.

"Today I announce my retirement from politics," he added.

Duterte, the leader of the PDP-Laban party, announced in August that he intended to run for the vice presidency at the end of his six-year term in the top job.

The Philippines' constitution limits presidents to just one term in office. Critics said Duterte was running for vice president in an attempt to hold on to power after his presidential term expired.

Duterte's longtime aid and personal assistant Christopher "Bong" Go announced his candidacy for the position of vice president on Saturday, alongside Duterte.

The party had previously been pushing Go to succeed Duterte as president, amid speculation that Duterte would then force Go to resign, leaving him once again as president.

Opponents had said they planned on challenging Duterte's run for vice president in the Philippines' Supreme Court.

Duterte is currently the subject of an investigation by the International Criminal Court over his human rights record during his "war on drugs," which has left some 6,000 people dead. Rights groups estimate the true number could be in the tens of thousands.

Saturday's surprise announcement could open the way for Duterte's daughter, Sara Duterte-Carpio, to run for president.

The current mayor of Davao had said last month that she was not planning to run for higher office, adding that she had agreed with her father that only one of them would run.

Duterte-Carpio has been the front-runner candidate in recent polls.

Candidate hopefuls must register by Friday, but withdrawals and substitutions can still be registered until November 15.

This could leave Duterte the option of a last-minute change of heart, mimicking his 11th hour entry into the 2016 election which he ended up winning in a landslide.

Antonio La Vina, a professor of law and politics at the Ateneo de Manila University in Manila, told the Reuters news agency that the current president's announcement "allows Sara Duterte to run," but he could not rule out the possibility of the controversial leader changing his mind.