Philippines: Families of war on drugs victims welcome ICC probe | Asia | An in-depth look at news from across the continent | DW | 21.06.2021

"This is the fight of all those families who lost someone they loved in this drug war — especially those whose deaths were undocumented," says one woman who found the body of her stepson with five gunshot wounds. 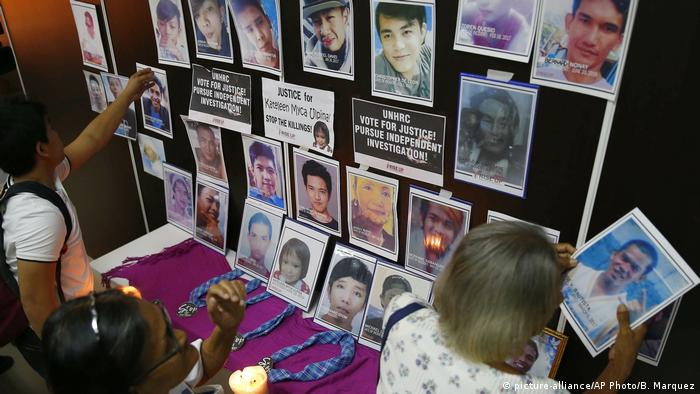 Since Rodrigo Duterte was elected to the presidency in 2016, more than 27,000 suspected drug peddlers have been killed

Katherine Bautista burst into tears when she received the news about the decision by the International Criminal Court (ICC) to seek a full investigation into Philippine President Rodrigo Duterte's war on drugs, which has killed thousands of people from poor urban communities, whom authorities have said were mostly suspected drug dealers .

Her stepson, John Jezreel David, was killed during a drug operation conducted by the police in 2017.

"We've been waiting for this for so long. Many times we felt tired, we felt hopeless but we held on," Bautista told DW, struggling to contain her tears. She is among the complainants to the ICC.

"If we don't keep on fighting for justice, the death of our loved ones will mean nothing," she said.

In a 57-page report published released last week, the ICC stated that, based on eyewitness testimony and media reports, there was "reasonable basis to believe that the Crime Against Humanity of Murder was committed" and that "police and other government officials planned, ordered and sometimes directly perpetrated extrajudicial killings." The Hague-based court announced that it would seek a full probe.

In 2018, the ICC opened a preliminary investigation into crimes against humanity in the Philippines and Duterte withdrew the nation's membership from the ICC soon after. However, the ICC has jurisdiction for crimes committed while the Philippines was a member.

"This is a much-awaited step in putting murderous incitement by President Duterte and his administration to an end," Agnes Callamard, Amnesty International's secretary-general, said in a statement.

But presidential spokesperson Harry Roque said Duterte would not cooperate with the investigation.

"We do not need foreigners to investigate killings in the drug war because the legal system is working in the Philippines," Roque said.

It was in 2017 when Bautista's stepson David, who was 21 at the time, did not come home from work. His absence prompted Bautista and her husband to search for him. They later found his remains in the morgue of a funeral home. His body showed five gunshot wounds.

Bautista's family filed a case against the police and went into hiding, fearing for their lives.

Government figures estimate that more than 6,000 people have been killed in police operations. Human rights organizations have said that the actual number is much higher as many families did not file cases out of fear.

'Failure' of the criminal justice system

Last May, the Department of Justice announced that it would investigate the criminal liability of police involved in 61 cases of drug war operations.

"The Justice Department submitted the preliminary results to Duterte and the national police. These are the ones implementing the war on drugs. Leaving it to them to prosecute themselves is, logically, a failure of the criminal justice chain," Conti told DW.

Mary Ann Domingo lost both her husband and son at the hands of police during the war on drugs. She then filed a case for murder.

Last week, the Ombudsman charged four policemen with homicide for the killing of her husband, Luis, and her son, Gabriel, who had refused to leave his father's side in September 2016.

Domingo is cautious about pinning her hopes on the ICC investigation.

"I am torn in half. On one hand, the ICC decision is an acknowledgement of our loss. The ruthless way they killed our men, it was as if because we are poor, we do not know how to feel pain," Domingo told DW.

"It's been five years of our whole life turned upside down," Domingo said. "My grandson, who is also named Gabriel, had just been born and never got to know his father. Where is the justice in that?"

Carlos Conde, a senior researcher at Human Rights Watch, told DW that the ICC prosecutor's decision is a strong sign that the prevailing culture of impunity will not go unpunished.

"The hope is that this will deter future governments from committing these crimes in the future, and equally important, take steps to ensure that these don't happen again," Conde said.

Sarah Celiz lost two of her sons, Almon and Dicklie. Both were killed in 2017, six months apart.

Celiz and her husband were left to care for 12 orphaned grandchildren. Classmates tormented one of their grandsons, calling his father a criminal. A few months ago, one grandchild died of measles.

Her husband, Alan, has been despondent and withdrawn since the death of their sons.

"His face lit up momentarily when I told him the news about the ICC. But I don't know ..." Celiz said, struggling for words.

"They took so much from us, not just our sons. They orphaned their children. My husband is still alive but in a way, they took the life out of him, too," she said.

On a number of occasions, Duterte has justified his administration's war on drugs. He even encouraged police to kill drug suspects, promising to protect them from the law.

The United Nations Human Rights Office  published a report in June 2020 — based on court and police records, as well as interviews with victims and witnesses — in which it detailed widespread human rights violations and persistent impunity.

The government's heavy-handed focus on fighting illegal drugs led to numerous deaths, arbitrary detentions and a suppression of dissent, the report said.